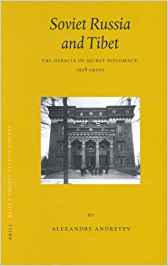 In the long and chequered annals of Tibet, India to the South and China to the West have played—and indeed continue to play—very significant roles. Expectedly, both have contributed a great deal to the texture of Tibetan life. The Chinese, more demonstrative in food and dress and to a degree in the organization of government; the Indians, deeper and more inward-looking in matters of religion, moral ideas and literary models. Essentially non-military and non-political, India’s major emphasis was on cultural ties; China’s on political linkages.This is not to say that other countries in Asia have not impacted the land of the lama, much less left it untouched. Thus, both the Japanese, a faraway island nation to the East, or Russia, a huge landmass to the North and West have done so, to no small degree. The Russian contacts go far back into the eighteenth century; the Japanese, more recent, relate principally to the first half of the twentieth. Andreyev’s impressive tome under review deals mainly with the Soviet interlude over a couple of decades. The body of the work falls into half a dozen slots starting with ‘The Bolsheviks enter the scene’ (Chapter 2) to winding up with ‘The final efforts to win Tibet over’ (Chapter 7).