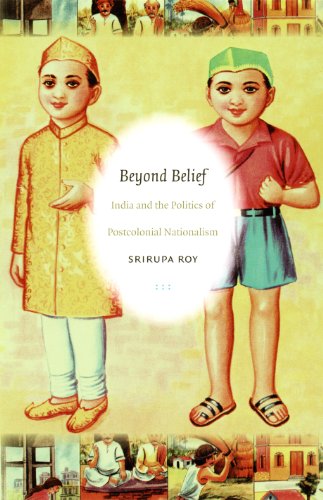 The postcolonial compulsions to grapple with or outgrow the memories and legacies of colonialism have produced a teasingly rich body of writings. If colonial experience called for negotiations and repudiations, their postcolonial interrogations have re-visited those sites for new answers and new fulfillments. The unshackling of the colonial world has raised doubts about the phenomenon itself; it has reviewed or redefined the historical experience of subjugation and the struggles to overcome it; and it has sought to come to terms with the brave new world it believed to have conjured up. The making and management of the new nation-states were not any less challenging than the obstetrics of decolonization. Srirupa Roy’s book, is a significant intervention in locating and making sense of the ways which the new Indian state used to craft its nationhood.

It essentially reviews the Nehruvian stances of ordering a nation out of peoples in the new context of colonial retreat, but visualizes them not so much as the ways of a leader as the monitored self-perceptions of an emergent and emerging nation-state.

It is, as the author assures us somewhat playfully, an unfashionable book about history ‘from above’, of capital city, powerful elites and dominant institutions that offered many inspirations of boredom and dust while trying to comprehend bureaucratic jargons, prescriptions and denials. (p. vii) It is ‘an exploration of the nation-state formation in postcolonial India; about how the state worked to define the meaning of India and Indianness, and in the process constituted a distinctive and authoritative identity for itself. …’ (p. viii)

Beyond Belief is a felicitously authentic interrogation of the nation-state phenomenon which has known and got used to the jostling enthusiasm and theoretical passion of dilettanti and scholars alike. Nation is more than what pre-modern ethnies produce or what is seen as an expression of industrialized society. It is also more than an imagined community, since that is determined by what it is given to imagine, or who gives it. Instead, nation may be seen as a constructed category, as what is made and historically contingent rather than as an essentialist, ‘found’ community. Srirupa Roy goes a step forward, and seeks to highlight the specific modalities, rationalities or techniques that enable nation-state formation, and argues that the reproduction of the nation-state rests not on the existence of individuals who identify with the nation but rather on their ability to identify the state as the nation’s authoritative representative. (p. 14) It calls for, as she points out, a shift from the paradigm of internalized identity and belief to a consideration of external effects and public practices—the public actions, performative displays, spatial interventions, and political discourses of consent and dissent that repeatedly accord recognition to the existence of the state and its claim of representing the nation (Ibid). Beyond Belief is an exploration into the strategies and practices that went into the making of the Indian nation-state, of the ways in which the ‘midnight children’ were schooled to believe themselves as constituting a splendid diversity that could be orchestrated into a constructed unity. It largely deals with Nehruvian India which inherited the strenuous triumphalism of the freedom struggle, and yet felt the need to forge a nation out of people which a pro-active state did by supplying them with new ideals and goals, new mirrors to see their images in, and in the process crafted a persistent advertisement for itself.

Srirupa Roy shows how these equations were struck, in the visual practices of the nation-state, first through the productions of the Films Division of India and second, through the annual spectacles of the Republic Day Parade. The Films Division of India enabled the state to be an authoritative representative of the Indian nation and quite literally allowed national audiences to ‘see the state’, undertaking concrete activities on behalf of the nation (pp. 34–35). Some of the best names were recruited for their production, and forty thousand prints were screened in cinema theatres throughout the country every year (p. 41). Not only was the state shown as the unifier of the nation, but its salvationary solutions were shown to lay in the Nehruvian beliefs in modernis, industrialism, and state-led economic planning and the corresponding marginalization of Gandhian ‘anti-modernist’ ideas about economy, society and governance. The productions of the Films Division lent themselves to Ernest Renan’s description of nation formation as a dialectic of ‘remembering and forgetting’ (p. 50). They also provided a distinct ‘sound’ through the use of a specific style of commentary which facilitated the social recognition of the gaze of the state. The second visual projection of the nation-state, which Srirupa Roy identifies, is the annual Republic Day Parades. They encapsulate the ritual practices of nationhood which draw upon the model of imperial assemblage of 1877 or the imperial durbars of 1903 and 1911 (p. 67). They highlight the spectacular diversity of the nation, in sound and colour, but in ordered stereotypes. They are also projected as being protected, managed and indeed represented by the state. The sinews of the state on display, whether in the ceremonial presence of colourful cavalry or caparisoned elephants, or in the real show of rumbling tanks, frowning missiles or zooming fighter-planes, are meant to assure the citizen and warn his enemy. The cultural floats in the parade not only represent what the state thinks the nation is, but also the changing contexts of hopes and fears, ideals or frustrations, reflecting what Tom Nairn and Homi Bhabha have noted as the dualism between ‘pedagogical imperative’ of constancy and the ‘performative imperative’ of reinventing the nation for the changing present and beckoning future.

If the Nehruvian nation-state is visually and ritually encountered in the continuous productions of the Films Division and in the annual spectacle of the Republic Day Parade, it also projected itself as the sole agency of transforming India into a new, modern-nation. In near imitation of the civilizing mission which the colonial state drummed up in its defence, the Nehruvian nation-state saw itself as leading a poor, backward people, left behind in history’s waiting room, to developmental salvation. This it did by announcing science as the panacea for national ills and also as a mode of inducting India into the universalized discourse of development. The hopes and strategies of scientific temper and development were meant to combat the endemic sloth and the Indian genius for stagnation. It also posited the belief that politics, with all its concessions to mediocrity and venality cannot carry India to the heights of progress. What was needed was ‘a few good men’, a meritocracy of scientists, and a regime of caste of intellectual elites that would show the way. In fact, it carried the metaphor of the scientist as brahmin (p. 12). Not only did the Nehruvian nation-state proclaim the redemptive powers of science and technology, it went on to showcase those models in the industrial townships and steel cities like Durgapur, Bokaro, Bhilai and Rourkela, which provided the ‘temporal visions—the utopian as well as dystopian imaginations—that consolidated the distinctive formation of the Nehruvian nation-state’ (p. 135). The steel town, Roy observes, was ‘a state artifact in the most literal sense’ (p. 138). In its urban planning, in its accommodation of the national mosaic and the hierarchies of work that showed in the construction and location of houses, the steel town was expected to be the new blueprint of progress. However, these models did not always sustain the trust of dreamers, as they cracked under their own internal strain that showed itself in the outbreak of communal riots. Those who dream also run the risk of waking into the harsher realities of life.

Srirupa Roy’s critical exploration of the making and the postures of the Nehruvian nation-state wring a new freshness out of a story that has acquired a tedious familiarity for its hero-centered structure as much as for the conflicting morals it is supposed to yield. The politics of postcolonial nationalism is here diagnosed within the state-nation paradigm, where the state worked to craft the nation, and in the process, became its sole spokesman. It also shows the efficacy of advertisement as instrument of state power, as of national endorsement. This framework of analysis even coaxes the author to relate the Nehruvian salvationary projects for the nation with the ‘India Shining’ slogan, and even to re-draw the distance between ‘diversity-embracing framework of Nehruvian nationalism and the monocultural aspirations of Hindu nationalism (p. 169). The hopes that Nehruvian project kindled were offered to a young expectant nation while the ‘India Shining’ dream was sold to a fatigued, cynical nation that had learnt to know the distance between the promise and performance in any advertisement. So also the author’s temptation to see the resonance between the Nehruvian ‘unity in diversity’ as showcased in the Republic Day Parades and the BJP Rathayathras may have some uncomfortable implications. The nation-state dalliance and the different tunes it croons have their familiar styles, but they also have to be contextualized in the different societies they have created and the moods they have whipped up. The author seems to miss it. But the book is superbly researched, felicitously written, and its arguments are presented with strength of conviction that does not abandon caution. Read it; it is rewarding.