Conundrum of Liberalism in Indian History 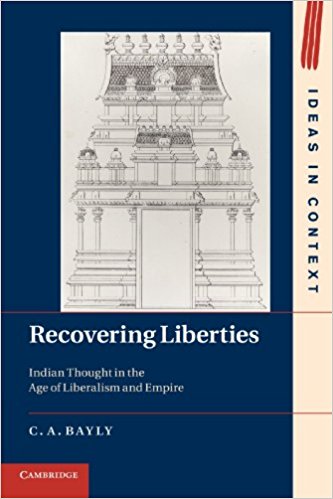 Christopher Bayly’s new book, Recover ring Liberties: Indian Thought in in the Age of Liberalism and Empire, traces the history of political thought in India with a specific focus on liberalism. Bayly attempts to trace the lineages of liberal political language in the Indian subcontinent from the beginning of the nineteenth century with Rammohan Roy to the middle of the twentieth. In the history of political thought, the terms liberalism and liberal have always been difficult to define. Both these terms have had an active existence in the field of actual politics. Moreover, the meanings of the two terms have also undergone crucial semantic changes in history. The project undertaken in this book is an ambitious one as it seeks to address all these issues. This kind of project in intellectual history or history of ideas involves enormous difficulties of methodology as theoretical constructs such as ideas and concepts don’t operate in the same tidy manner as they do as part of a coherent theory. Neither can they be rigidly applied to describe historical situations in a neat manner.
In the recent revival of intellectual history generally, and history of political thought particularly, the methodological frameworks of Reinhart Koselleck, Quintin Skinner, and J.G.A. Po-cock are being widely used to get around some of these problems and to trace the history of ideas in a way where ideas and ideologies can neither be completely reduced to such things as material forces or the logic of the structures nor can they be understood as ‘unit ideas’ (Skinner) continuing over long periods of history without losing their essential identity or changing their meaning. Furthermore, a renewed focus on the active nature of the political ideas, theories, concepts, and ideologies is also noticeable in these new histories even if it is conceded that they need to be understood in the context of their origins or usages. Bayly does not elaborate his method at the outset but engages with the methodological issues through out the book.