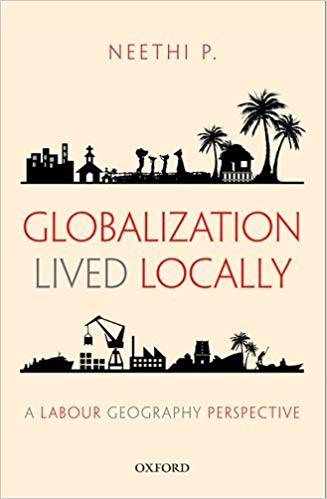 For over a decade now, the field of labour geography, or the analysis of how industrial relations are shaped by and in turn shape the spaces that they are played out in, has become an important one in understanding contemporary capitalist industrial and labour processes. Emerging from a critique of conventional economic geography, which does not address how labour shapes the geography of capitalism substantially, as also of traditional Marxist analyses of capitalism which assume that the power to shape the places that capital locates production in largely rests with capital, labour geography looks at labour and workers as possessing ways of shaping the geographies of their production and existence as well. This shaping of spaces through place-making, as it is referred to in the literature, by workers also influences the geography of capitalism. Neethi’s book deals with the theme of globalization and labour, employing a labour geography perspective to understand labour control, conflict and response under a globalized regime in Kerala. She asks key questions in the book: Are national governments and organized labour powerless in the face of unfettered deregulation of capital and labour markets? How do workers function as social agents? How do local discourses of globalization play out? What are the spatial elements that come into play in understanding labour control strategies and labour responses?