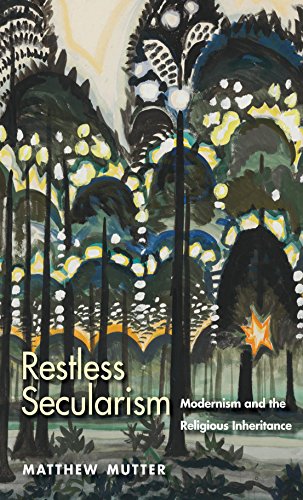 Mutter notes that the transfer of religious energies into the domain of literature (what Matthew Arnold had termed ‘culture’), the sociological or anthropological rather than the spiritual concerns of the modernist novel, the ‘distinctly secular premises’ from which twentieth century social science tended to re-describe religion, are all characteristics of this displacement of religion onto the social.

When objects and forces—god, spirits and so on—were removed in a ‘disenchanted world’ around the turn of the twentieth century (in Europe), secularism offered historically contingent and contestable evaluations of what it meant to be ethical and aesthetic, good and beautiful. Thus, Mutter makes a case for investigating the secular frames that alter the coordinates of all experience, religious or other, with the premise that both religion and secularism in their various configurations are ‘forms of knowledge’ (p. 29).