Complexities of A Social System 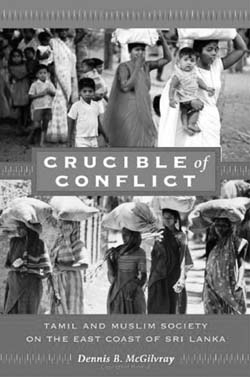 Dennis B. McGilvray in his book Crucible of Conflict: Tamil and Muslim Society on the East Coast of Sri Lanka, ex-plores the ethnography of the Eastern region of Sri Lanka, originally inhabited by Tamil Hindus, Moors, small number of Sinhala chena cultivators and Vedda hunters. As a result of the Gal Oya project and other large, internationally funded irrigation and peasant-resettlements, significant shifts had occurred in the proportions of Tamils, Moors and Sinhalas living throughout the Eastern Province after independence, as government settled significant Sinhala population under those irrigation projects. While poor Tamils and Moors in this region were benefited enormously from irrigation projects, they had negative political implications in the long run.