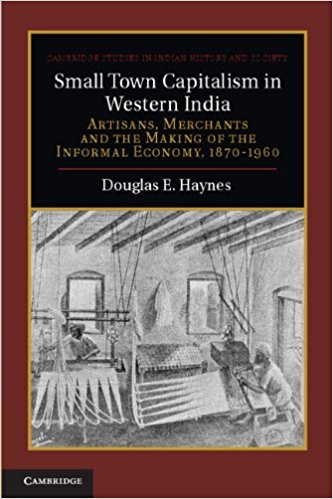 It is often lamented, both in academic and popular discourse, that colonial rule had a deleterious effect on the indigenous handloom industry edging the hapless weaver, unable to withstand unfair competition with mill-made cloth, out of the market. In his newest book, noted historian of western India, Douglas Haynes provides a fascinating account of the Indian economy over a one-hundred year period spanning the middle of the nineteenth to the mid-twentieth century. His focus is artisanal production in western India and in this complex and detailed social history of three towns that emerged as unrivalled centres of cloth production well into the colonial period. He concludes that while there is no quick and easy unidimensional analysis of de-industrialization to be found here, neither would it be correct to suggest that pre-colonial economic structures continued seamlessly into colonial economic formations.

Haynes suggests a far more nuanced and complex history of change, adjustment and renewal within new and changed economic structures where different patterns of production, distribution and taste had all to be accounted for. How small town artisans managed this transition is what this book is all about and in the process it tackles head-on several earlier positions in the writing of Indian economic history.