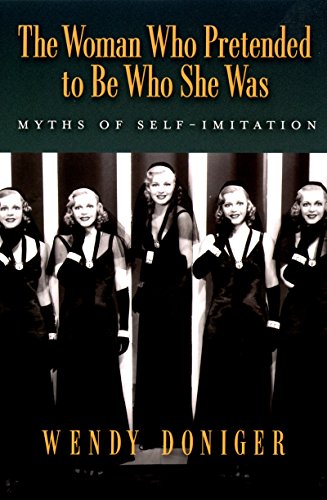 Common Patterns in Differing Traditions
Pradip Bhattacharya
THE WOMAN WHO PRETENDED TO BE WHO SHE WAS: MYTHS OF SELF-IMITATION by Wendy Doniger Oxford University Press, 2006, 272 pp., $32.00
April 2006, volume 30, No 4

This book, with an unusually long title, rounds off the investigation that Wendy Doniger, Mircea Eliade Distinguished Service Professor of the History of Religions at Chicago, launched in 1998 with The Implied Spider: Politics and Theology in Myth (Columbia University Press). The study sought to show how a web of shared meaning is woven by common patterns recurring in differing cultural traditions, leaping “from myth to myth as if they were stepping stones over the gulf that seems to separate cultures”, bridging the religious and the political, the personal and the universal; and how, from the same text, different political meanings can be drawn depending upon the historical context. The next year, in Splitting the Difference: Gender and Myth in Ancient Greece and India (University of Chicago Press), she analysed myths of sexual doubles to reveal how myth-making can become a means of breaking barriers of gender and culture. The millennial year saw the publication of The Bedtrick (University of Chicago Press) examining the patterns civilization has created to lie about sexual relationships.