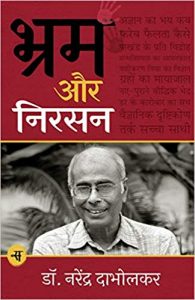 Dr Narendra Dabholkar, an Indian author, medical practitioner turned social activist, founded the Maharashtra Andhashraddha Nirmoolan Samiti (MANS) in 1989, the first organization of its kind working against eradicating pervasive superstitious beliefs. Murdered by a fanatic under the all-pervasive intolerant stand of the Rightist elements, he gave the society a vision and laid the plinth of a rationalist society. Dabholkar was a hard-core rationalist, known for his crusade against superstition and the book under review Bhram aur Nirsan is an exponential record of his beliefs and what he aspired to eliminate from Indian society.

Originally written in Marathi in the year 1985, it was first translated in Hindi in 2018 by Vijay Shinde.

Dabholkar was against all superstitious beliefs and practices, which have plagued Indian society till today and the book sets out with the agenda to talk explicitly about various practices and beliefs which take people away from rationality into the deep recesses of superstition and aberrancy. Divided into several short sections, Dabholkar takes up diverse ideas in each section, trying to look at them from a rationalist perspective vis-à-vis the prevalent specious beliefs surrounding them.

In the section titled ‘Andhvishwaas ka Apaatkaal’, Dabholkar looks at the human tendency to justify everything that happens in their life through the concepts of fate and destiny, which furthers these superstitious beliefs and forces them to seek help from self-styled Hindu ascetics. Dabholkar condemns this idea throughout and draws a parallel rational concept for people and solicits them to follow the same. Directing his gaze at rural areas, he tries to assert how the idea of Black Magic supersedes rationality so much so that at times people have to lose their lives. People seek cure for not of dog bite and snakebite through ascetics and proponents of Black Magic which sidelines medical help and endangers the life of the individual concerned. Schizophrenia and hysteria, which are serious psychological ailments get defined through baseless and unsubstantiated human belief in some evil spirit possessing the human body and no medical help whatsoever is sought in this context. Oftentimes these practices are adopted and manipulated by people to meet their ulterior motives and they survive because of the foolhardiness of the common people who zealously believe in such ractices. He reviles Indians’ reliance on astrology to delineate and validate everything in their lives, which is strictly against all kinds of scientific practicality. The concept of ‘Bhaanmati’ is discussed in great detail in one of the sections wherein people justify the anomalous behaviour of individuals and which never impels them to look at the matter rationally. In Bhram aur Nirsan, Dabholkar gives the example of a boy who feigned being in the grip of an ominous curse of Bhaanmati to seek love and compassion from his mother and to get away from his studies. Through such examples, the aim is to highlight how such credulous beliefs corrupt the human soul and become tools of evil in  society. Not only rural uneducated folk but he also gives the example of well-educated urban folk who fall for such ideas and fashion a belief system, which becomes hard to break through.

Dabholkar tries to free society from beliefs, which cannot be proved and can also harm the society. However, several times in the book he plays with the idea of religion and faith vis-à-vis superstition which is a different concept altogether. There is a very thin line, which distinguishes faith from superstition and Dabholkar in his of unfounded beliefs seem to blur this line making it objectionable. Undermining the idea of deism, which works on a holistic belief system without breaking into either religion or superstition, he denounces the whole concept altogether. The text therefore, at times becomes overtly critical of everything which is not scientific, and the reader if trying to justify his faith runs the risk of becoming the same kind of a person whom the text condemns and demonizes. Condemning superstitious beliefs and practices, it also appears to be attacking the plinth of religion, which might not be as staunchly rigid and dubious as it has been painted in the work. The text jumps into a dangerous terrain and seems to claim things, which could be contested. The aim of the work is to free society from the evils of superstition but the text appears to be lacking a fine balance and at times becomes didactic.  Nevertheless, written from a noble agential thought of reformation, it delivers the message to society by ostensibly lashing out at such practices and hoping for a world premised on rationality and judiciousness.

Nominated for the REC-VoW Book Awards, the book makes a fair claim as the intention behind the work makes people overlook certain ideas and the text comes across as a strong plea for venturing into a society which holds only rationality as its ultimate weapon to combat superstitious beliefs, furthering Dabholkar’s vision.