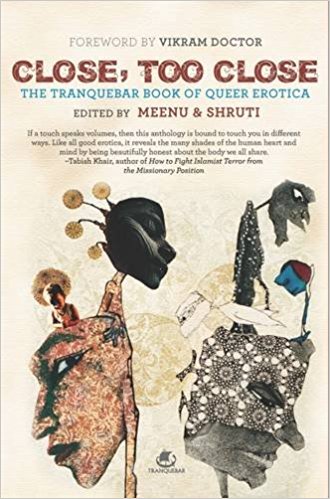 The book opens up a gamut of emotions that rules human psychology. The inner pages carry cartoons of how people are attracted to each other through various mental mappings. Vikram Doctor’s foreword and the editors’ introduction entice the mind leading to such sexual urges and emotional upsurge, which usually one tends to avoid discussing in public or prefer to keep hidden secret within a caged psychology. The collection has encompassed several sexual feelings—from voyeurism to intellectual sex, from seasonal encounters to one-night stands, from religion to class—everything seems to be compiled in the fourteen stories of the collection. The editors have thoughtfully and evenly spread all the stories so that the reader doesn’t get bored with such a continuity of only gay eroticism, or lesbian eroticism, or even bisexual eroticism. But one can make a clear-cut judgment that lesbian stories are more in number in comparison to gay ones, eight and five to be precise. Only one can be categorized as a bisexual story, although bisexuality is seen across a few of them.

Annie Dykstra depicts the sexual encounter in a swimming club. The protagonists involve in fulfilling their desires that begins in the pool and ends under the shower. Michael Malik G. takes the reader to the paradisical natural beauty of Kashmir. The proliferation of sexual urge imbibes between the protagonists crossing the boundaries of religion and region. Unlike Dykstra’s story where the love erupts and subsides with the fulfillment of the sexual urge, D’Lo gives the story a touch of exploring sexual fantasy through the fragrance of physical relationship within the same apartment, but very intelligently giving it a diasporic colouring of India on American soil. Very artistically, Abeer Haque draws the carnal relationship between two men with the changing of seasons, to enhance the factor that each season has its own charm for the accomplishment of sexual needs through different sexual postures. Ms-behave balances a perfection between the hero-ine of her story and her two different sexual partners, keeping the reader and her protagonist guessing as to who is better for the ultimate pleasure. Chicu in her ‘Soliloquy’ makes an excellent portrayal of voyeuristic pleasure in a crowded metropolitan bus, drawing a distinct emphasis that it is the heroine’s feeling who is keeping her sexual fantasy dwindling between a man’s butt and woman’s breasts. Although very common, these pleasures of sandwich voye-urism have hardly ever been compiled with such finesse.