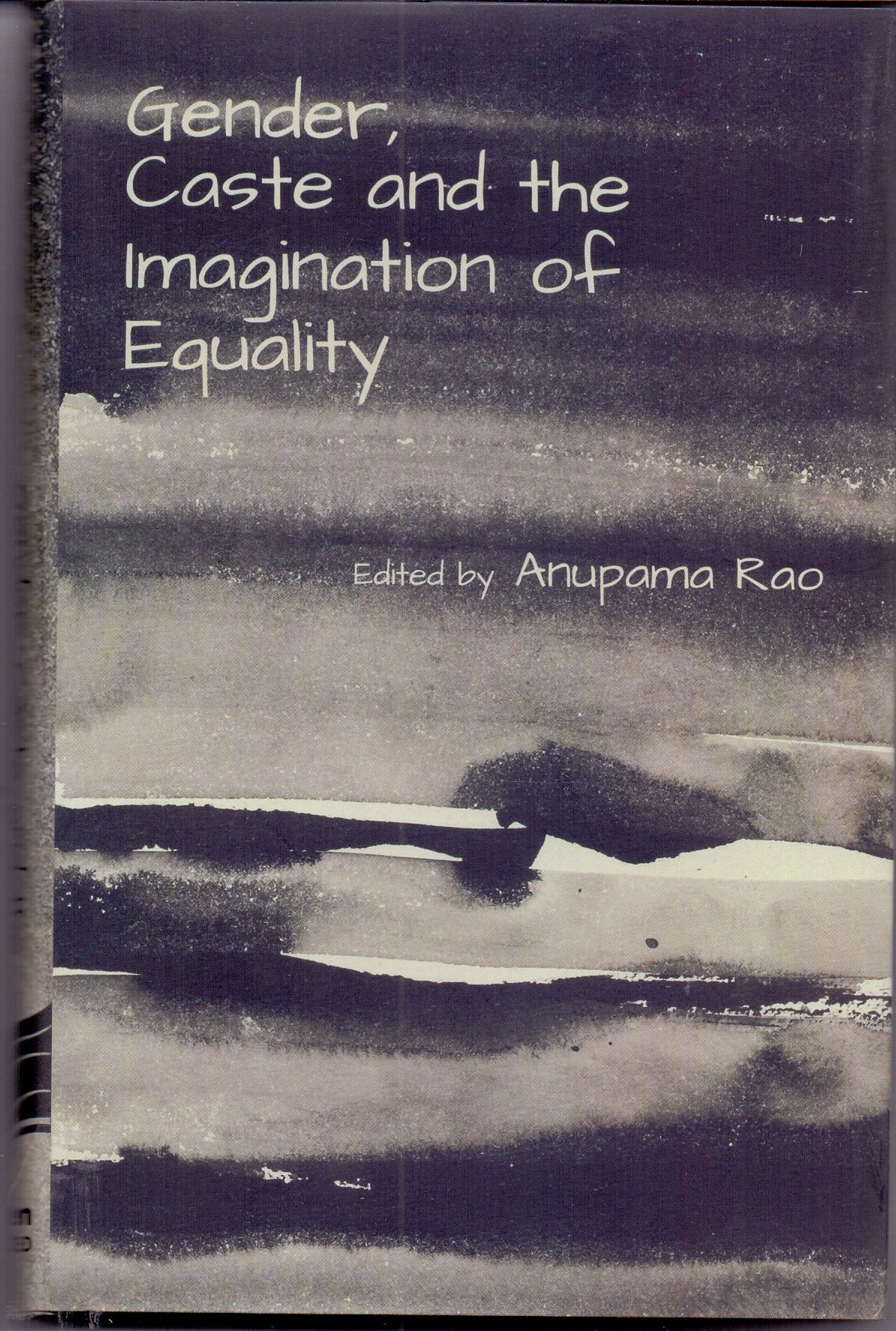 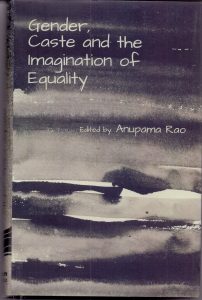 The volume Gender, Caste and the Imagination of Equality edited by Anupama Rao reverberates with conversations on several tracks that speak of the complexity of cultural politics in a deeply patriarchal society structured by Hindu majoritarianism and caste. In the context of a Hindu majoritarian caste order, Khalid Anis Ansari examines the pasmanda critique of the majority-minority and its pursuit of transformative constitutionalism and democratic symbolism (p. 320), pointing out that in its practice of politics, ‘it confronts all the challenges that any counter-hegemonic identity movement faces in its formative phases… [and yet] the pasmanda struggle for a post-minority politics is ongoing and there is hope that it will democratize Indian Islam in the long run’ (p. 320).

Religion and sexuality are at the centre of the politics of caste-gender in Hindu majoritarian India, and at the centre of anti-caste resistance. Sharmila Rege recalls Dr. Ambedkar’s 1936 speech to devadasis in Kamathipura: ‘…the Mahar women of Kamathipura are a shame to the community…There are only two ways open to you: either you remain where you are and continue to be despised and shunned, or you give up your disgraceful profession and come with us’ (cited p. 196). As a counterpoint to this view, Lucinda Ramberg probes ways of locating the religious and sexual subjectivity of Dalit women and offers a provocation drawing on her work with devadasis: ‘It is as bad subjects whose behaviour exceed modern protocols of decent womanhood and proper religion that they find room for manoeuvre and means of critique’ (pp. 37-38). The tension between modernity and the incitement of ‘non-modern’ forms of religio-sexual practice may not be understood in a linear reading.

Stepping away from the hermeneutical forms of ‘[m]arginality and loss, paucity and disenfranchisement’ (p. 109), Anjali Arondekar poses two questions: ‘What happens if we abandon the historical language of search and rescue and focus instead on sexuality and caste as sites of radical abundance—even futurity? What would it mean to let go of our attachments to loss, to unmoor ourselves, as it were, from the stakes of reliable ghosts?’ (p. 110). She approaches these questions through her work on the Gomantak Maratha Samaj tracing the emergence of a ‘Devadasi Diaspora’ (p. 111) that interrogates stable narratives of loss and recuperation. Qudsiya Contractor reflects on the challenge posed to mainstream discourse on Muslim women as docile victims by Qureshi women who participated in the public protest against beef ban in Mumbai, and urges us to focus on ‘[Muslim women’s] praxis as a way of understanding their ways of doing’ (p. 307).

The question of difference and its intertwining with caste, class and gender identities and gender expressions brings up the important yet fraught question of agency and subjectivity. If we acknowledge multiple intersecting identities and difference, how do we then signpost the politics of belonging? In the conversation between Dalit trans-woman Living Smiley Vidya and Nair trans-man Gee Imaan Semmalar, Smiley takes issue with labelling, ‘They always want to show trans people as “different”…My struggle was not to be seen as “different”. I want to be seen as any other woman, it’s only for political rights that I identify myself as transgender. It’s not a label that should overshadow every part of my existence’ (pp. 58-59). Is this ‘fixing’ of gender identity a part of the technologies of rule of caste, asks Semmalar (p. 63).

Aniket Jaaware’s essay is part of his larger seminal work on practices of touchability and untouchability. Looking at Baburao Bagul’s works of fiction, he maps the ethical universe of Dalit writing and the significant shifts it effects between the author and reader. There is, he argues, an ‘intimate relationship between truth and fiction’, such that the author renders the reader impoverished in ethics—just as the characters are (p. 82). This ethical destitution is necessary, according to him, because it is only here in this impoverished place that a fusing of representation in the literary sense, and representation in the political sense can be brought about—the tension between the political and the ethical is one that ‘haunts the discourse of Dalit literature’ (p. 83).

Shailaja Paik dwells on the intimate politics of the Dalit movement, tracing the specific ways in which contentious discourses on caste and education lead to new gendered subjectivities that are ‘unlike the elitist creation of a modern, mellow, dependent, bourgeois woman’ (p. 265). The literary worlds of Dalit writers like Urmila Pawar, for Manuela Ciotti speak powerfully to her anti-caste struggle and her struggles within her marriage and family turning her autobiography ‘into a sharp critique of the caste universe as much as of her own life’ (p. 205). Ciotti observes that Pawar’s writing echoes issues she has grappled with in her own writing, ‘with regard to the representation of Dalit subjects, the ethnographic genre, and the resulting politics of knowledge production’ (p. 207).

If the spectre of caste looms over every aspect of our lives—‘its very ordinariness, its presence in speech, bodily deportment and everyday acts of sociability’—how may one de-stabilize and dismantle something that is so deeply embedded in the everyday, asks V Geetha (p. 95). Examining the insights from a volume edited by Perumal Murugan, she finds that the ‘crucial role that the household plays in regulating the use of space, touch, intimacy and possible fraternities in a deeply divided society is yet to be appraised with the seriousness and criticality it deserves…’ (p. 96). Examining Satyashodhak and self-respect marriage reform in terms especially of the challenge it posed to Brahmanical hegemony and the sexual regulation of women, Anupama Rao traces how ‘an earlier project of radical anti-casteism, which predicated the reform of gender on the equality of caste, was transformed into a masculinist project of political non-Brahmanism and Dalit social reform’ (p. 176). S Anandhi probes these questions in relation to the Dravidian movement.

Charu Gupta examines the simultaneous juxtaposition of Dalit women as grotesque, stigmatized and lascivious on the one hand, and ‘victims deserving redemption’ on the other in print genres. Taking a close look at ‘caste gendering’, she underscores ‘[t]he distinctive, yet sometimes aligned, positions on caste gendering by various players [that] mess archival predictability, and make room for a more robust history of the gender of caste’ (p. 155). Reconstituting patriarchies was an important part of their restoration by Dalit men, ‘as altered practices in relation to women became an important means of upward mobility for Dalits’ (p. 169)—enabling Dalits thereby to ‘at times disarm dominant cultures of caste and gender’ (p. 170).

YS Alone’s essay on Dalit Aesthetics presents an interpretation of the work of artist Savi Savarkar representing devadasis: ‘Complicating the question of the perception of the male and female gaze…Savi questions the very ethicality of the Indian society that still nurtures the devadasi tradition. While living in disguise…he was able to become an inside observer to this practice, and used his position to embark on a meticulous reflection of caste, gender, and sexuality’ (p. 324). Drawing on this and other examples, he suggests that ‘Dalit artists challenge the representational economy of religion, caste and sexuality’ (p. 331).

Resettlement sites that have sprouted after urban displacement in a neo-liberal city become the ‘fermenting grounds for caste, gender and communal violence [while remaining] vulnerable with its copious socio-economic anxieties’ (Varsha Ayyar, p. 228). Svati Shah discusses the multiple social meanings ascribed to solicitation for manual day wage labour from public labour markets in Mumbai, ‘nakas’. The challenge, in her view, is ‘to formulate a political-economic critique of caste and gender [that] includes the issue of how to treat sexual commerce and sexual exchanges, including “sex for work” as part of the economic structure in which non-upper caste women survive’ (p. 245).

This volume, in Prathama Banerjee’s view, steps away from the ‘benign empiricism of intersectionality’ and poses the question of ‘difference’: ‘How and how far does “difference” as a concept help us in [the] act of co-theorizing [caste and gender]?’ she asks (p. 333). And yet, the essays in the volume speak to intersectionality as a robust theoretical tool, even as they speak to the concept of difference—both co-constitutive rather than mutually exclusive, challenging any possibility of reduction to ‘benign empiricism’. How do we understand inter-sectionality, situated belonging, difference, intimacies, labour, politics, sociality, literary imagination, visual cultures and intellectual engagement—the anti-caste moral imagination—in the co-constitutive sites of caste and gender?