Chronicling Life In The Slow Lane 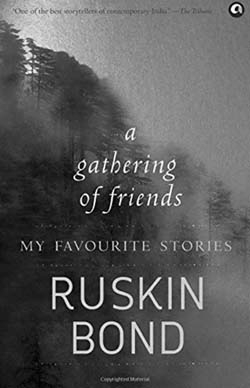 In the Preface to his book, A Gathering of Friends, Ruskin Bond mentions his critics, the ones who have sometimes felt that his stories are less stories, more character sketches, for want of a plot. In his inimitable style, with gentle humour, he points out, that life doesn’t come with a plot.

One can imagine him, glint in his eyes from the witticism, continuing tell the everyday tales of life, from the observable and plausible, to the fantastical. Bond has been an intrepid chronicler of life in the slow lane. At the ripe old age of 81, he has selected some of his favourite works in a slim volume. For readers familiar with Bond’s writing, it will indeed seem like a gathering of old friends, chatting away in a cosy house in the Himalayan hills in soft light, looking out at the evening chill with a warming drink in hand. The young boy Rusty breaks free of parental disapproval to find freedom and exhilaration after a rambunctious morning spent playing Holi with local friends. Anil strikes an unlikely friendship with an English lady in the last days of her life, becoming a suitable heir to her book on flowers. A railway employee cares far more for the life of a leopard that minds its own business, often finding refuge in a train tunnel, than for the technological marvel that the heaving, serpentine train is. A young girl is saved from a flood by a dark skinned boy who plays the most divine sounds on the flute. A cherry tree is nurtured, with great trials and tribulations, from a seed that was carefully stashed away by a young boy and his grandfather. And of course, gutsy, determined Biniya, whose blue umbrella makes her the toast of town, often inviting avarice and envy.
As our protagonist comes of age, boyhood innocence makes a departure. Love stories blossom, and with it an awareness of the opposite sex. Bond’s Gracie is an alluring woman desired by the many soldiers taking a break from fighting in the Second World War in the cool climes of Dehra. At the zingy Astley Hall on Rajpur Road, music, intoxicants and merriment flow, and Gracie’s musical career lasts as long as the war. A boyhood crush comes to a sad end later in life upon accidentally discovering her living in penury. Heartbreak is a running theme, for later, the author chases a beautiful fantasy from a gauzy, summer romance in the hills, only to find himself practically cuckolded on the harsh plains of Delhi.
There is much ghoulish sadness too. Susanna is the stuff of legends, having a reputation of creatively and fatally disposing off seven husbands. In Shamli, a broken-down hotel of some past glory is home to an assortment of characters pretending to have frozen time so as not to encounter the crushing banality of the present. An erstwhile maharani desperately tries to keep up older rituals and her royal status in a collapsed, ramshackle world brought on by war, and the creation of a new country.
It is not just Biniya or Ranbir or Anil or Mrs Mackenzie who serve as characters. The entire stretch between Delhi and Dehradun, and upwards towards Tehri Garhwal come alive, mostly in their pristine avatars from the past. Going past Astley Hall in Dehradun today, with its beauteous form covered with the ugly, loud marks of the ‘modern’, or up on from heavily built up Rajpur, to crowded Mussoorie, or the dried up, stinking and encroached river bed of the Bindal river passing through Dehradun, it can be hard to imagine these as sites of jolly adventures. All the more reason to savour the nuggets of the world gone by.
Every story offers a life lesson to be learnt—the virtue of patience and perseverance, steadfastness and faith; plain, old kindness, towards fellow humans, plants and animals, love and fun; but also, the troubles life brings; jealousy, fear and greed; the slow, heavy sadness and defeat of a crumbling world even as the new one creeps in, the utter normalcy of disaster and madness. Bond imbues his fiction with every human habit and emotion that makes one feel much happier and also much less squeamish about having felt them. Not all of us readers may live in the Himalayas, but the stories remain ours. Nothing highfalutin, and hence, so comforting.
Moving in life with friends fictional and not, Ruskin Bond expresses his gratitude at having arrived unharmed at the current stage of his life. His jottings on life are collected in A Book of Simple Living. Musings and memories mix, and the words open up the mind behind the fabulous tales. Bond is never far away from nature, and could possibly not bear to be. His sharp eye notices every plant that struggles against rain and concrete to find life; every bird and insect going about it’s daily life, providing much fodder for the author’s literary ecosystem. Spiders are friends and bats are company. Between contemplating on the cool moonshine and the boy who is a lot like a lazy cat, Bond drifts in and out of his memories.
He thinks a lot about the precious time spent with the woman he loved, about the people who turned into characters in his stories, and those that did not. He thinks about his craft, writing. He thinks of those great emotions—love, happiness and contentment. The notes are of erratic length. The sense of intimacy is strong enough to make one feel like a bit of an intruder, guiltily satisfying the desire to know what makes Ruskin Bond tick. And that is exactly what one gets. It is easy to understand that the gentleness of Bond’s writing is but an extension of his deep and thoughtful mind, and the uncluttered way in which he has chosen to live his life. Both the books give the fan/reader the Bond fix they are always looking for. It is an addiction where even more is never enough.
Sucharita Sengupta is Assistant Professor, Department of Political Science, Jamia Millia Islamia, New delhi.