Childhood Memories and the Making of an Artist 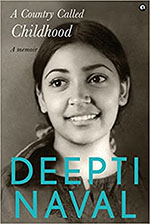 When one thinks of Deepti Naval, one immediately wants to frame her into a film sequence with Farooq Sheikh, both of whom have been remarkably great actors in Indian cinema. And so, when I eagerly picked up her autobiography, A Country Called Childhood, I was half-expecting at least a chapter or two on her life as a Bollywood actress who was at the fore of ‘parallel cinema’ which has left an indelible mark in the history of Indian films. However, to my initial disappointment, the book does not offer any Bollywood masala but what it does share is the story of a young girl who lived through significant political changes in the world around her and those that shaped her into Deepti Naval we partially know from the big screen.

Naval’s memoir can be broadly divided into sections that talk about her grandparents’ and parents’ journey across countries, her growing up years as a girl in Amritsar and negotiations with learning various forms of art, her unique friendship with her batchmates most of which continued for a lifetime, her experiences with people with mental health issues, and finally, her love for Indian cinema, all of which have contributed to Deepti’s personality that is as multifaceted as the characters she has played on screen.