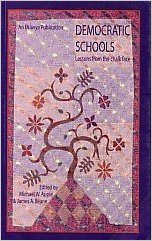 If you believe Margaret Mead’s words that we should, never “doubt that a small group of thoughtful committed citizens can change the world; indeed it’s the only thing that ever has”, then the four examples of democratic schools presented in this book will enrich, invigorate and serve as a much-needed tonic. It appears as if there exists a universal tacit agreement on schools becoming factories, of being further distanced from the community etc. But there is seldom any global sharing on the ways in which educators on a daily basis strive hard to make schools open and democratic spaces. Democratic Schools, though it focuses on four schools in the US, has widespread appeal for educators everywhere because the narratives contain challenges that schools encounter globally which have been overcome, not by drastic structural changes but, by the perseverance and faith of a small group of committed citizens. As the editors point out, “These schools are committed to an education that build upon student and community needs, cultures and histories. They are committed as well to anti-racist, anti-homophobic and anti-sexist principles, and are organized around a deep concern for social justice.”