Catching Up With Krishna’s Consorts 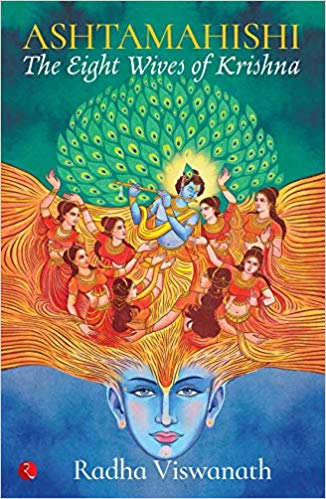 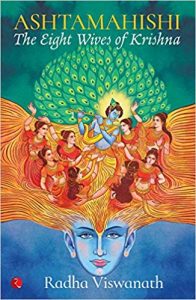 Radha Viswanath’s Ashtamahishi: The Eight Wives of Krishna is a work of religious fiction, a genre that along with mythological fiction is seeing a major revival. A number of writers are choosing to return to the epics, the Ramayana and the Mahabharata, and retell them from feminist or subaltern perspectives and enabling us to hear the stories of characters that have been silenced. Viswanath attempts to occupy a slightly different space. The author says she wrote the book to understand the role played by Krishna’s eight wives; why they chose to marry Krishna who had neither crown nor political position, and how they contributed to his life’s mission. Her overarching narrative is in keeping with the traditional chronicles of Krishna although there are some significant deviations she chooses to make.

The book attempts to destabilize a male telling of the story of Krishna by dwelling on the role played by the different women in his life, especially his wives. Viswanath fleshes out the stories of each of the eight wives, drawing upon certain counter indicators that are embedded within the multi-layered, multi-dimensional text that is the Mahabharata. For instance, while we already know that Mitravinda was Krishna’s fifth wife and that her brothers Vinda and Anuvinda disliked Krishna and rallied to the support of the Kuru Prince Duryodhana, Viswanath describes how Mitravinda quarrelled with her father and two older rothers for the right to be in charge of her life and participate in discussions about her marriage. We also have Satyabhama telling a bemused Satyaki, much before she married Krishna, ‘I have worked overtime to ensure Krishna’s success … (I secretly) maintain a generous supply of horses, chariots and gold for Krishna’s missions’ (p. 57).

In most accounts of Krishna, he is popularly represented as a child, a lover, a warrior, an upholder of dharma and a philosopher. Here, we see Krishna as a husband who upholds the idea of marriage as a partnership based on mutual love and respect. He speaks up against marriages entered into for financial or political gain and advocates the idea of conjugal love. It is interesting to note that of his eight wives, Krishna married three of them—Rukmini, Mitravinda and Bhadra Devi—because each sent word through secret emissaries, professing her love for him and requesting him to take her away from her parental home and marry her. Kalindi and Satyabhama too informed him beforehand of their desire to marry him.

Krishna’s exposition of his belief in dharma or his discussions of philosophy and spirituality take place in his conversations with his wives—singly or together—and not when he talks to Arjuna or the men of the community as is the wont in traditional texts.

In spite of Viswanath’s professed intent to highlight the thoughts, feelings and lives of the eight women, only three of them—Rukmini, Satyabhama and Mitravinda—are given a certain amount of agency. One hardly ever hears the voice of Jambavati, Kalindi, Lakshana or Nagnajiti. However, like in academic narratives of feminism, the different women in Krishna’s life believe in building a sorority, a sisterhood of women who will reach out and build networks and support each other.

The real heroine of the book is Krishna’s third wife, Satyabhama. Strong-minded and an independent thinker and doer, Satyabhama does not hesitate to initiate and set in motion any enterprise that catches her fancy. Unfortunately, after her marriage to Krishna is formalized, all her thoughts and energies seem to revolve around—rather stereotypically—gaining ascendancy over the other wives in Krishna’s affections.

The telling of the story proceeds at a measured pace. Viswanath’s use of language is not visual but one that lends itself to a more aural mode. She moves from event to event and does not indulge in the ‘thick description’ that has become popular with contemporary writers.

The book cover by Onkar Fondekar and Mugdha Sadhwani is a beautiful work of art.

Padma Baliga is an English Professor turned library evangelist for she believes that every child has a right to a reading life.