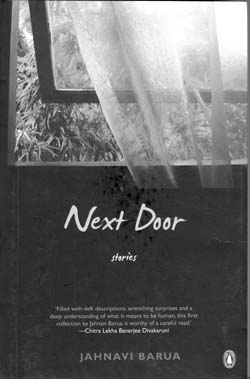 Next Door is a collection of eleven short stories by Jahnavi Barua, recently published by Penguin India. Set for the most part in the valley of the Brahmaputra in Assam, these stories deal with extraordinary events in the lives of ordinary people living there. These events are not unusual in the sense of being in any way dramatic or earthshaking, but in the sense that these incidents, simple in themselves, acquire a greater meaning and significance in the lives of the characters. They make it imperative for the characters to take decisions that will often change the way their lives move on from that point. The stories themselves flow seamlessly. But like the Brahmaputra that is a strong presence in many of them, the seeming tranquility of the surface hides a strong turbulence beneath. These undercurrents are only hinted at, but the reader is made quite aware of the power of those emotions and thoughts that seethe beneath the surface, propelling the stories forward.

Several of these stories deal with happenings next door. This is perhaps a throwback to small-town Assam, when discussions about the neighbours took up a great deal of time, their lives seemingly so much more interesting than ours! But sometimes the reader gets a frisson of horror as events unfold next door, as in the eponymous last story of the collection.

Many of these stories have children as the main characters. Indeed, several of them unfold from the point of view of childsight. In any case, they have children at the fulcrum of the narrative. Whether it is Jiu in ‘The Magic Spell’, the son of ‘Holiday Homework’ or even the childlike Santanu of ‘River of Life’, children looking at the complexities of the adult world form the theme of the stories themselves. There are other stories where the conflict and turmoil of the land impinge. ‘Honeybees’ tells the story of a simple rural boy whose only ambition is to make life a little easier during the flood season for his family. To earn extra money, he joins the para military forces. Though a large part of his life is spent in the un-military pursuit of gardening in the big police boss’s compound, his sincerity and alertness catch the eye of the boss’ wife who requests him to be part of the security detail when her husband goes on tour in the conflict-ridden land. When the inevitable happens, and he falls prey to bullets meant for his boss, he dies, dreaming of the honeybees who too die defending their golden treasure. ‘The Patriot’ tells the story of Dhiren Majumdar, an elderly man who suddenly finds himself forced to give shelter to an insurgent on the run. Unexpectedly, after a life of conformity, he redeems himself in the eyes of his wife by his compassionate behavior towards the wounded boy.