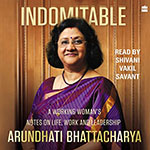 Arundhati Bhattacharya’s memoir has a literary flavour, mixing personal elements with the professional admirably. But it is distinctive in the way her experiences have been articulated from the perspective of a ‘working woman’. And this feat she accomplishes with elan, making her reflections a readable treat and compelling to empathize with.

To begin with, it is a story of a girl growing up at Bhilai and Bokaro and then in Kolkata for higher studies before joining the wider world of professional banking. Thereafter, it is largely a story of the heady days of public life mixed with occasional disappointments. The incidents, some joyous and others not

so, have been deftly woven into a narrative that makes one understand why her rise as the first woman to head India’s largest bank (2013-17) was not just a matter of chance or luck. At what point in her life she started gaining self-confidence and who are the persons shaping this shy and not-so-healthy girl discover her elements have all been chronicled with warmth and gratitude.

While the milestones in her life have been softly highlighted, the work is not for self-publicity. It is rather exceptional that the book does not contain any photograph. She also does not drop names of Ministers, Secretaries and other key people with whom she had to interact during the peak of her career. The book remains wholly focussed as ‘A working woman’s notes on life, work and leadership’.

Yet, the book does not read officious and dreary. She does not mention the names of her teachers of English Literature at Lady Brabourne College and Jadavpur University but details at length what life in a Calcutta hostel was like for young women at that time, and how she savoured the taste of newly found freedom. And there are stories galore, often recounted with fun and delight.

Bhattacharya explains with remarkable clarity how she faced choices at definitive or turning moments of her life—what subject to study and where, which service to join, about finding her partner (while posted at the SBI branch at IIT, Kharagpur, she met Pritimoy who taught computer science there) and the like—and how she negotiated her way through.

Bhattacharya narrates her experiences and challenges while she was moving up the corporate ladder. Like many officers not afraid of taking decisions in good faith, she also had to face investigation by the New York Securities and Exchange Commission after the deposit instrument, Resurgent India Bond, was launched. She records in detail her experience of the exhausting deposition, and, more importantly, the lessons she learnt, like ‘Never say something of which one has no personal knowledge. I think that Indians have a tendency to answer based on second-hand knowledge—something said by a friend or colleague, something overheard—because we just don’t want to appear ignorant. This is dangerous and to be avoided at all costs.’

Bhattacharya walked the tightrope seeking to achieve work-life balance which, understandably, was never easy. But she identifies the critical issues, elaborates on them and shares with the readers the difficulties faced, without projecting herself as extraordinary. Having experienced the inconveniences women face in their workplace, she did everything possible to mitigate them. But she does not claim credit for such actions. The tone of the book conveys her sensitivity and confidence without betraying any trace of arrogance.

Chapters, tellingly titled, such as ‘The Eighteenth Floor’, ‘Sabka Saath: The Key is Collaboration’, ‘The Future is Digital’, ‘Leading a Banking Behemoth’ are as vivid as her detailing, sprinkled with anecdotes of the early phases like ‘Bhilai: The Best Time of My Life’ or ‘Bokaro: Growing Up Pangs’.

Professional to the core, she writes ‘If PMJDY (Prime Minister’s Jan Dhan Yojana) posed a very large challenge to the banking system, demonetisation was no less.’ She focuses strictly on what was required to be done, and how the tasks got accomplished. Unlike some retired radicals, she does not fall into the easy trap of going judgmental about governmental decisions.

In a recent interview to The Times of India (February 13, 2022), she said about her husband, ‘Pritimoy is cognisant of the fact that I am quite passionate about having a career and has made adjustments. For instance, he left IIT because he knew that if he had stayed on it would mean a split family. What I appreciate most is that he does not see it as a sacrifice or rub my nose in it. So, I think it is a question of understanding, empathy and support.’ This maturity of understanding and her ability to share the essence of life as a doer and, as we discover now, as an accomplished writer, enriches the texture of the book. The book should interest all women and men in the banking sector, as also those broadly interested in public service.

Amitabha Bhattacharya, an engineer by education and a retired member of the Indian Administrative Service, has served in the erstwhile Planning Commission as Principal Adviser in charge of Education and Culture, and with the UNDP, Delhi. He writes mostly on public affairs in national dailies.