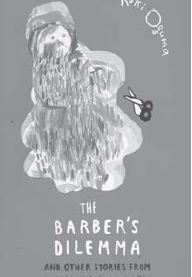 Young children play in the most unstructured manner. A child holding a ladle may decide she is holding a mike and singing a song. Moments later, the ladle becomes an umbrella, or a bus, or a spoon to stir her mother’s coffee. A game of swordsmanship may transform into one playing with fallen flowers and seeds, or a classroom game. There is a marvellous sense of fluidity in the way children negotiate their way through a world that seems infinitely wondrous and ever-changing.

Koki Oguma’s stories and illustrations attempt this unstructured, even stream-of-consciousness method of negotiating with the world. Oguma writes about the people who live and work and play on Manmaru Street. There’s a Ms. Oda who made a giant candy which reminded her of a slide, and so she and her friend slide down the candy, licking it as they went along. And there’s Mr. Tuchida who wanted to build a house on his head. As the house takes shape. Mr. Tuchida’s neck begins to hurt with the weight of the bricks. A kind builder gently puts a cold compress on his neck. Mr. Isoda, a fisherman listens to the river and begins to speak its language, He becomes so good at it that a shoal of fish enters his mouth, mistaking it for a river. Oguma writes, ‘Mr. Isoda didn’t mind at all’.