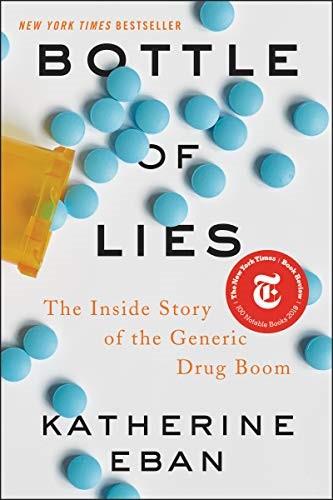 Catherine Eban is an American journalist known for her ‘Investigative firepower’. Bottle of Lies: The Inside Story of the Generic Drug Boom is her second book on the pharmaceutical industry. Eban’s first work Dangerous Doses: A True Story of Cops, Counterfeiters, and the Contamination of America’s Drug Supply, which dealt with the distribution of illicit pharmaceutical products, did not get much attention. In Bottle of Lies, Eban performs the surgical skewering of the ‘dark underbelly’ of the generic drug industry. Sensationalism and scare-mongering are the warp and woof of the book. The cover design itself attests to this fact. Indian generic drug company Ranbaxy is targeted in the cover itself.

The book, divided into seven parts, reflects Eban’s versatile reportorial techniques. She discusses the quality issues of the generic drugs by delving into the nitty-gritties of unethical practices involved in the drug development and drug approval. For the preparation of this book Eban claims to have interviewed about two hundred and forty people and also gone through more than 20000 internal documents of USFDA, Ranbaxy and other generic companies. Thus, Eban has paid keen attention to detail. The book is not just about Ranbaxy alone, the attack is also centred on non-Asian generic companies like Teva and Mylan. The book which has all the ingredients of a medical thriller is captivating, and at the same time disturbing. And, of course, there are heroes and demons. The obvious heroic one is Dinesh Thakur, the whistle-blower who intimated the U.S. Food and Drug Administration (USFDA) about Ranbaxy’s mistakes, oversights, poorly executed investigations, procedural lapses, audacious lies and blatant disregard for truth.