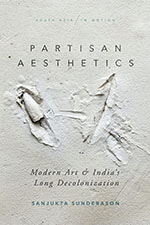 The central questions that historian Sanjukta Sunderason asks in her book are these: What does ‘partisan aesthetics’ connote as a conceptual frame? What historical work can it do with the artistic field of mid-twentieth century India as archive, and what does it lend methodologically to the field of global and transnational art histories of this period? (p. 4). These questions are examined with a decisive conceptual and methodological clarity, and there are at least four distinct ways in which the arguments unfold and retain their balance. First, while historians have for long studied the ‘political ruptures of decolonialization,’ Sunderason makes a compelling case for art becoming archives, and artists, ‘constituents and protagonists’ of history, and not simply ‘symbols of national or global or postcolonial modernisms’. This has critical implications: indeed, for curatorial imaginations of ‘third world aesthetics’ presented increasingly at international biennales and art summits, but more importantly the amalgam of modern art and decolonization constitute a complex intertwining of form and time, opening up a ‘dialectical field of the political—with dispersed, fragmented and at times contradictory histories.’ With this, the ‘historical question of the political in art’ becomes central to the overall significance of the book. And this is the second point. The conceptual clarification of the political here is derived primarily from Bourdieu, wherein as opposed to a clear ‘coherence or objective consensus’, the political is underlined by a sense of ‘struggle’, and ‘all the contradictions it engenders’. Its historicity and the temporal dimensions are revealed precisely by recognizing it as a struggle. This historicity, to quote Sunderason, ‘comprises rhetorical acts—agendas, projections, manifestos, and counter propositions, of both affirmation and negation—and generate, in effect, the political content of the artistic field. The question of artistic style becomes central to this dynamic of the political as art’s historicity…revealing critical possibilities of destabilizing the often-assumed symbiosis between art and nationalism in the post/colony, or for rethinking modernity in postcolonial art beyond modernism’s affirmations’ (p. 11). And therefore, thirdly, this sense of the political provides the conceptual support for the phrase ‘partisan aesthetics’..