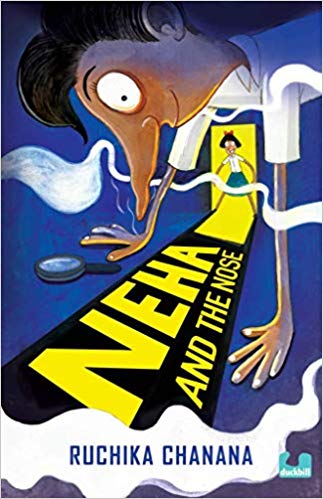 NEHA AND THE NOSE

Homegrown middle grade fiction in India is on the rise and thankfully so! Neha and the Nose written by Ruchika Chanana brings two young detectives, one with the brains and one with the, um, nose, into the scene, where they uncover the truth about various mysteries like who stole the Sadanand Sharma Trophy for Extramural Excellence or who was stalking Harini, the head girl.

Johan, or the Nose, tends to become overly dramatic when he is using his nose to sniff out clues, become either Shakespearean or Sherlockian in his speech (and sometimes Chairman Mao too!), and while Neha rolls her eyes at this, she indulges him because together, they can work better at solving mysteries. Filled with nose-y puns and several other synonyms for ‘nose’, Neha and Johan are the school’s undisputed crime solvers who sometimes tend to disagree about their roles as detective and sidekick.

A serious mystery comes their way when they discover that the warden of the girl’s hostel has been attacked but instead of being allowed to solve it, their detective talents are directed towards solving the ghostly occurrences that are taking place in the girl’s hostel. Johan has a crush on the school’s queen bee Sarika who ‘had somehow achieved a look that was natural in an Alia Bhatt sort of way.’ He thinks solving the hostel poltergeist problem will make him appear more manly before the pretty Sarika and Neha thinks it’s just a waste of time.