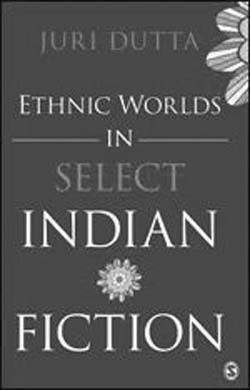 Ethnography can be defined as the systematic study of people and cultures—an exploration of cultural phenomena from the point of view of the subject of the study. By this definition, a large amount of literature that we read is indeed ethnographic and diverse, even though it may only be a documentation instead of a faithful and authentic representation. Juri Dutta’s Ethnic Worlds in Select Indian Fiction claims to be the ‘first of its kind’ study of ethnographic fiction from ‘different regional languages of India’. Yet, as the text expands, it ends up being a study of primarily writers from the North East region—Yeshee Dorjee Thongchi, Rong Bong Terang, Lummer Dai, Sishuram Pegu—with a few ‘others’ thrown in from outside the region—Narayan, Mahasweta Devi, Pratibha Ray and Maitrayi Pushpa. The latter category are obviously those writers who also write about tribal/ ethinic cultures, even though they may or may not be tribal themselves. And Dutta undertakes her study as a comparative one, although the points of comparison have no connectivity with each other.

Although the book is an honest attempt to bring focus on a hitherto neglected area of Indian literature from the North East, and particularly from Assam, I feel that it doesn’t entirely succeed in its mission. However, there are some positives. It educates readers from outside the area on the historiographic and prevailing discourses on literature in Assam, beginning from the 12th century and till the present day. The whole idea of the Assamese language is of course crucially linked to the identity politics and linguistic identity of the state. Dutta then goes on to discuss the ideas of insider/outsider for the creative writer and the issue of ‘shifting identities’. The subsequent chapters of the books—‘forests, human rights and development’, ‘folkloristic’ ‘materials in ethnic novels’ and ‘feminist readings’— aim at various writings on tribal/ethnic communities, choosing a variety of writers from North East and Eastern India. The chapter on forest rights discusses, among others, Pratibha Ray’s Adibhumi, published in 2001 in translation, a work that was heavily critiqued by the Bonda tribe members and others for doing ‘serious damage to the moral ethics of the community’ (Dutta: 77). Dutta argues in this chapter that whether it is Thongchi, or Ray, or even Mahasweta, all of them express the fear of destruction of an ethnic way of life by a new alien culture, while at the same time she argues that ethnicity has no essence, or centre, and no common denominator.
In the chapter on folklore materials, Dutta brings to the fore a whole new set of authors whose work she discusses, with only Thongjee as the common link with the previous chapter. A writer from Kerala, Narayan is also discussed here, as the only writer from non-North Eastern India, but why Narayan is included in the list, apart from the fact that he writes on the Malayarayar community of Kerala, remains unclear. More so, as Dutta spends little more than a page discussing him and his writing. She concludes at the end of the chapter that ‘folklore has a significant relationship with ethnicity’, and that it is ‘one of the strategies for ethnic mobilisation’ ( Dutta: 110).
The chapter on feminist readings looks at three selected texts, again with the shared theme of ethinicity and marginalization. The conclusion to the book fails to weave together the various strands and themes that have been discussed in the preceding three chapters.
I felt a basic sense of disconnect between the title of the book and the contents. While ‘select Indian fiction’ is understandably generalized, the book, as discussed above, primarily talks about select North Eastern and Eastern writers, Narayan being the only exception. Secondly, a chapter on Assamese ethnographic fiction and history of Assamese literature seems absolutely unnecessary in a book that is supposedly about ‘Indian fiction’. The introduction begins with definitions and discussions on tribe, representation, the Indian novel and Comparative literature, in that order, without any kind of linkage and continuity among the sections. The fluidity of the text suffers from a lack of continuity and contextuality. A lot of name dropping exists across the text, more to demonstrate that the author is aware of/has read theory, rather than its actual relevance to the issues being discussed. This impedes the reading of the text, which is otherwise written in lucid and jargon-free language. Juri Dutta seems to fail in her efforts to bring the literature of the North East into the ‘mainstream’. The chapters seem to be individual research papers around a similar theme, brought together in the form of a book. This is unfortunate, for a more focussed and in depth analysis of ethnographic fiction from North Eastern India, of which even now little is known, could really have been path-breaking research. It is truly an opportunity lost.
Madhumita Chakraborty is Assistant Professor in the Department of English, Zakir Husain Delhi College (Evening), University of Delhi, Delhi.