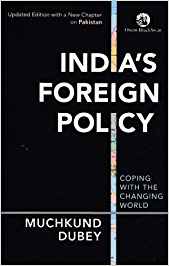 A review of India’s external relations by a former Foreign Secretary always makes for a good read as it has elements of an insider’s view not just from a ringside seat, but as a key player. Muchkund Dubey’s treatise is a scholarly work that looks at India’s place and aspirations in a changing world.

The sheet anchor of the country’s foreign policy was nonalignment and the Non-Aligned Movement strove to promote peace, development, disarmament, decolonization (accomplished), the establishment of a just and equitable world order and the strengthening of multilateralism under the United Nations. Dubey argues that though the Cold War is over, the basic premises of NAM survive and remains a bulwark against the new hegemony of great powers and military and economic consortia in a globalized world. It is however increasingly difficult to get a consensus within NAM as the numbers have grown exponentially. Big powers too are prone to use carrot and stick policies to win ‘non-aligned’ support.