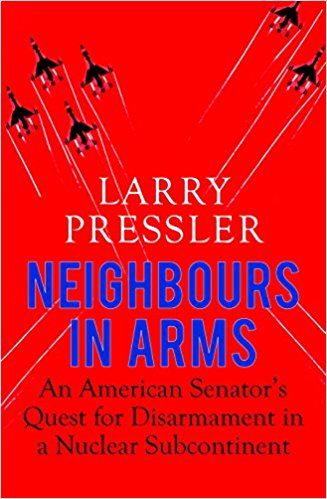 In his memoir Neighbours in Arms, the former U.S. senator, Larry Pressler, advances a simple theme: ‘India’s democratic government [and] location … make it a natural … geopolitical ally. We should decisively choose India … We must downgrade Pakistan and treat it as it is: an irresponsible, dishonest, rogue state’ (pp. 53–54). His book focuses on his legislative efforts in the eighties and Pressler claims that if a law bearing his name—the Pressler Amendment—had been enforced, Pakistan ‘would have been forced to shut down its [nuclear weapons] programme’ (p. 198). While Pressler’s viewpoint may resonate with sections of the Indian security establishment, these positions—like Pressler’s book—are naive and gloss over historical facts.

The interesting parts of Pressler’s book are unrelated to arms control and comprise Pressler’s description of the influence of lobbyists and money in the U.S. government—a synergy that he calls the ‘Octopus’.