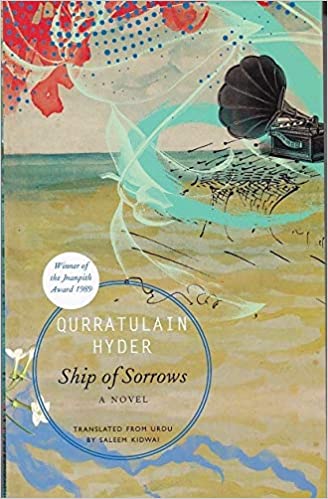 Ship of Sorrows is the English translation of Qurratulain Hyder’s second novel, Safinae Ghame Dil (1952) written during the tumultuous years in Pakistan immediately following the Partition of the country. It is regarded as a sequel to her first novel, Mere Bhi Sanamkhane written on the eve of India’s Independence when the author lived in India. Ship of Sorrows obliquely mentions the circumstances that had compelled the author’s family to migrate to Pakistan in 1947. Safinae Ghame Dil was followed by Aag Ka Darya (1958), her magnum opus, while she was still in Pakistan, after which she returned to India where she lived and wrote an impressive body of work, fiction and non-fiction, till she breathed her last in 2007. Urdu’s finest writer in the twentieth century, Hyder had equal felicity in English and, to my knowledge, she enjoys the distinction of being India’s most prolific self-translator.

Daringly experimental for a novel written in Indian languages in the fifties of the twentieth century, Ship of Sorrows deals with the lives of the Muslim feudal families in northern India in the two decades preceding Partition, exemplifying the composite culture of the time popularly known as Ganga-Jamuni tehzeeb. The ensemble of characters in the novel is more or less the same as in her first novel, My Temples, Too, as also the literary and cultural geography, although the worldview presented in Ship of Sorrows  is less optimistic, the tone more ironic, even cynical at times. Existentialism casts a long shadow in the book which is not surprising considering the fact that both Sartre and Camus were very popular in the Indian subcontinent in the fifties and sixties of the twentieth century and influenced many modernist Indian writers.

[1]*It appeared in The Annual of Urdu Studies (Wisconsin, Madison).