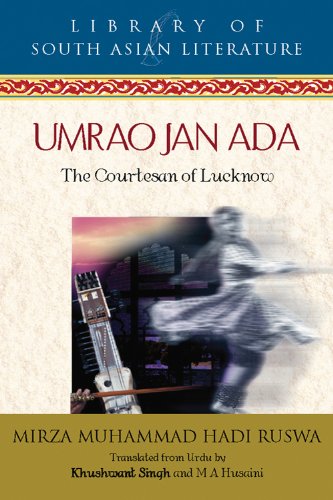 This is a new edition of the English translation of this Urdu classic (1900) which was first published in 1970 under the series. ‘Unesco Collection of Representative Works’, and later reprinted by Disha Books. Umrao Jan has almost become a figure of folklore after Ruswa immortalized her in his novel, Umrao Jan Ada which by now has several celluloid versions of it produced both in India and Pakistan. Arguably, this is the first Urdu novel as we understand the genre, despite Qurratulain Hyder’s claim to the contrary, sharing with many other first novels in different Indian languages the common feature of a female protagonist. Allegedly modelled on a real life character and, again allegedly, on G.W.M. Reynold’s Rosa Lambert the novel has remained popular ever since its publication more than a century ago. Ruswa successfully translated quite a few novels from English into Urdu, including at least three by Marie Corelli, before writing this novel. He was a self-conscious artist who set out deliberately to write narrative prose works which scrupulously shunned the world of fantasy and enchantment popularized by the dastan tradition and the overt didacticism of some of his contemporaries.