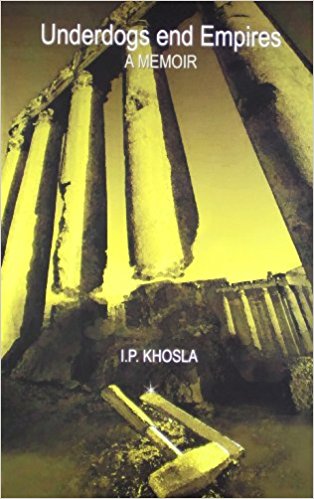 I.P. Khosla’s book Underdogs End Empires seeks to give an uncommon perspective on international relations(IR), that of the underdog. This perspective developed, as the author explains in the preface, in the 60s and the 70s—the grand period of decolonization—from discussions with diplomatic colleagues from India and from the newly liberated countries, his readings and, of course, from his diplomatic experience in various capitals. It differs sharply from the western view of IR, which is normal, as in that exhilrating period when countries under foreign yoke became free, the urge to interpret the dynamics of empire building and resistance from their own experience would have been particularly strong. However, as the author notes, this new way of thinking was neither a carefully argued theory nor did it have an elaborate structure. And while it seemed to explain much better the ground realities, it became moribund as time passed, especially with the end of the Cold War, and got submerged by standard western theories. The scholarship and discourse on international relations, Khosla rightly observes, is dominated by western countries. The western view, as we know, gets increasingly entrenched in thinking all round, even in non-western countries, through a stream of publications by acknowledged specialists, university reading lists, research projects, reviews in presitigious journals. In this situation an alternative, non-western view of IR is very difficult to project internationally.

For one, IR theories on empire building and the relationship of the European countries with the non-western world have been built around the conduct of these countries towards each other and towards the non-European powers. The non-western populations of the time are not seen as actors with a structured, intellectual base for their conduct, with impulses of their own that would match the maturity, rationality and coherence of the Europeans.