All About Films and Censors 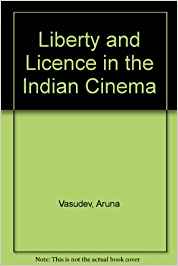 In the field of film writing, in India more verbiage has been devoted to discussing film censorship than perhaps any other topic except for the private lives of film stars. Acts, reports and other connected official documents have been briefly discussed, filed, put, and sometimes not put, before the public, thereafter, reactions have varied from individual film producers or directors fighting their own cases on matters of principle, but really in self-defence to the now familiar tit-bits about ‘to kiss or not to kiss’. Film writing in India, from columns to editorials, has occasionally devoted space and thought to the subject. But nowhere has there been a systematic effort to line up all this data, to illustrate it with factual documentation and to submit it to analysis.Aruna Vasudev, in her book Liberty and Licence in the Indian Cinema, which is a thesis for which she got her doctorate from the Sorbonne, has now, at last, provided students of the cinema, socio­logists and, hopefully, the film industry, with a meticulously researched, attractive­ly written and most helpful book on the subject of Indian film censorship.[ih`c-hide-content ihc_mb_type=”block” ihc_mb_who=”unreg” ihc_mb_template=”1″ ]

Its origins and history, of individual fights for freedom and finally, provided us with the gloomy view that, whichever way one looks at it, neither the constitution of the censor boards, their way of functioning, the mindless bureaucrats who sit in final judgement on this frightening subject nor, indeed, the arbitrary and selfish last words of politicians in power on what is still as much an artistic as much as a moral issue, has changed much over the years. The Victorian and, indeed, purely colonial values which made the British institute censorship at all, and the equally lop-sided values which the gods that be continue to follow, with perhaps less justified Indian nuances to the present day, lead to one depressing conclusion after another.

In the course of this brief review it is not possible to analyse each and every point. For one thing, Miss Vasudev has of necessity gone to various sources, writings and statements by others, and put together what has been done and said on the subject, since censorship is not a subject which allows one to be inventive or original in the literal sense. It is evident that the writer put in a lot of homework and worked very hard indeed to gather facts. In brief, she has devoted chapters to its early history under the British and then followed the fortunes of censorship right down to Kissa Kursi Kaa and other films made roundabout and strongly affected by the Emergency and, alas censorship during the rule of the Janata Government.

She has also given the salient points of each formal measure adopted down the years, the findings and recommendations of various inquiry committees and to what extent they have been followed or flouted. These follow a by now familiar pattern and what is depressing is that bureaucracy has always won out, because it is longer lasting than politicians, however subservient it might be during a particular period. But what is truly horrible (and this is documented) is that the film industry itself has never as a whole fought the principle of censorship per se. Indeed, at one time it was thought of as a convenient cover for films which might be suspect in the eyes of Indian traditions or parochial or ultra-moral attitudes. This, perhaps, remains the ultimate tragedy.

But in highlighting the experiences of even courageous film-makers, from ‘independent’ documentary film-makers,· such as Khwaja Ahmad Abbas to features such as Gulzar’s  Andhi, Miss Vasudev has put into a book for ready reference what so far had caused excitement at the time or in later talking shops, but which would have languished in cuttings files and other inaccessible places for those whose job and profession it is to have a book handy when in a hurry. And, ironically, even serious film writers (let us leave aside gossip columnists and other champions of the fleeting pen) are extremely hazy when it comes to quoting what are the exact niceties of film censorship rules and regu­lations. They vary from country to coun­try and many of our film experts seem to think that India is the only crank in this respect. By gathering facts on censor­ship regulations, the attitudes of Govern­ments and other authorities in different countries (mostly western) Miss Vasudev has shown that while some countries have an enviable record, others are just as unimaginative in the actual execution of rules.

One of the bigger foibles even now operating in India in the matter of censorship is the reactions of different communities, different regions and, indeed, different state governments chipping in with their views down the years. For those who think that the Bombay film is the only one chronically affected by censor­ship (and not always for the sight readers) it is interesting to see what the regional cinemas have gone through but without making as much of a noise.

For collecting all these facts, which have been there for everyone to see, read and heat: all these years, and putting them into book form, we must give all credit to the writer. The Indian film scene is woefully short of serious books on the cinema. It is a pleasing thought that the first much-discussed film book in the earlier days of Independence was also by a woman and also a thesis for doctorate­—Panna Shah’s The Indian Film, sponsored by The Motion Picture Society of India. Now, 28 years later another woman has produced this updated work.

It gives rise to the intriguing thought that in spite of the pseudo-Hedda Hoppers of film gossip magazines, some of the major writers on films in India remain women. And, unlike Miss Shah, they have received precious little help from the industry for serious research. Indeed, in its complete failure in sponsoring any serious film research, the industry has been as guilty as in its acquiescence of censorship itself.

Amita Malik is a well-known journalist.