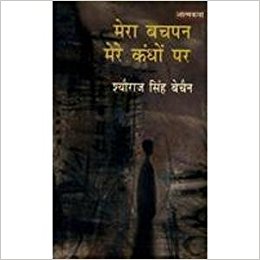 Written in Hindi, and under translation into Urdu, Punjabi, Marathi,Malayalam, English and German, Sheoraj Singh Bechains autobiography, is a paradigmatic lifestory of a member of one of Indias numerous dalit castes. Bechains book is an extended narrative of his struggle against social disabilities imposed on him by birth. Born into a family of tanners and therefore stigmatized as an untouchable, Bechain was constrained to bear all through his childhood the burden of acute economic hardship as well. Indeed, it is the image of a young boy weighed down by manifold pressures of life that gives Bechains book its title. The chronicle of his early experiences, which has been endorsed as a most powerful example of protest literature by no less a reader than the eminent literateur, Mahasweta Devi commences with the tragic loss of a parent which afflicts the already troubletorn existence of the child called Sauraj and his siblings.

Suddenly rendered fatherless, the three children are left to the mercy of an adverse fortune in the shape of their dislocation from their ancestral homestead in Nadraoli, as their mother is married off by her father, in quick succession to a second husband, Ramlal, and then to a third husband, Bhikarilal. In Bhikarilals household, comprising him and his two unmarried brothers, Daalchand and Chhotelal, the three children are subject to much suffering. Sauraj is all but recruited as an apprentice to a gang of robbers by his criminally inclined stepuncle, Daalchand. His stepfather, Bhikarilal, a tanner, like most of Saurajs bloodrelations, does enroll Sauraj, along with Roop Singh, his own son by his first marriage, in the local school at Pali Mukimpur village. But since Roop Singh does not display the academic promise that Sauraj does, Sauraj invites upon himself the wrath of his stepfather, who one day summarily burns Saurajs books. His books destroyed, Sauraj nevertheless looks for means to resume his studies. His desperation in this regard prompts him to steal one rupee from the kurta pocket of Daalchand, who is a semiprofessional gambler. Unfortunately, the crime is discovered and attributed to Saurajs mother. The poor woman is thrashed mercilessly for a misdeed of which she has no knowledge at all.