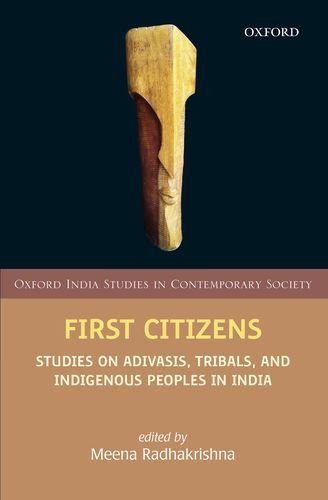 Rarely does one come across a work of serious social science dealing with the phenomenon of inequality which is not ‘overly theoretical’ (to use one scholar’s phrase), and yet accurately describes that elephant in the room. The authors and editor of First Citizens: Studies on Adivasis, Tribals, and Indigenous Peoples in India are none of them blind men or women as in the fable, but clear-eyed economists, historians, and sociologists.

This volume of fifteen essays on a significant segment of India’s poor (8.6%, or 104,281,034 persons) is a many-veined narrative about what really weighs upon the heart of modern Indian democracy. It is the reality of ever-evolving forms of inequity, against a backdrop of patchy ‘development’. With Meena Radhakrishna’s introduction and an epilogue, as well as an informative appendix of the relevant laws, the book as a whole presents a coherent argument for the meaningful inclusion of these ‘first inhabitants’ as equal citizens of the Republic.

It is not politically correct yet to openly deny them that status, but an assumption, often unspoken, has been gaining ground that the egalitarian position is not justiciable, and cannot be allowed to stand in the way of the nation’s economic ‘growth’—never mind if such ‘growth’ is not reflected in the well-being of these vulnerable sections.

The homelands of India’s indigenous peoples are among the most bio-diverse in the world and have been for centuries a significant source of the country’s wealth. The very ground beneath their feet happens to be one of the world’s richest mineral zones, supplying materials ranging from coal and iron to copper and bauxite, to name just a few, without which modern industrial economies cannot survive. Given that the riches in their territories are vital for the national economy, what part do these citizens of India play in national life? What is their share in national wealth?

The irony is inescapable. A Munda woman says of Jharkhand: ‘Mine is a very rich “desh”!’ She is a domestic worker in an urban household. Not out-and-out impoverished as most Jharkhandi migrants are. It is a vast informal labour pool of uprooted men and many women often separated from their families, working in fields and tea plantations, brick kilns, mines, construction sites. Even beauty parlours in large towns and cities. (Statistics about the State’s average per capita income—Rs. 37,000—a year, a figure got at by merely dividing the State’s GDP by its population, do not reflect the actual distribution of wealth). She’s not rich, either—not anywhere near ‘middle-class’, with all the empowering socio-economic and cultural indices implied by that term.

As we watch them present their ‘oh so colourful’ dances on national holidays, that elephantine question rumbles beneath the sound of their drums. Madhu Sarin describes how commonly-held ancestral lands have been taken over by the State on various grounds, from mining to development projects, and for the conservation of wildlife. They are driven out as ‘encroachers’. To fancy that adivasis don’t know why they are being driven out borders on the naïve, and shows how stereotypes about ‘ignorant/innocent/simple-minded/primitive’ people have been internalized by outsiders.

Two studies on migration focus on women: ‘Unfree Mobility’ by Indrani Mazumdar, and ‘Urban Housekeepers’ by Neetha N. Caught in a cycle of debt and separated from their families, what migrant tribal women suffer is stark anomie—a loss of connectedness. Simply put, a loss of identity.

What do India’s indigenous peoples call themselves? They prefer their own names—Munda, Oraon, Santhal, Bhil, Gond, Khond, and so many others. Of all the terms others use for them, such as vanvasi, adimjati, girijan, it is ‘Adivasi’ that appears to be most acceptable to most of them (excluding the peoples of the North East who associate the term with tribal migrants from central India). Virginia Xaxa says the very term ‘tribe’ is widely discredited today across the world. Starting from the vexed issue of their origins, their ethnic, linguistic, and cultural identity, she ploughs through the rocky terrain of nomenclatures and terminologies, including the Schedules under which they are classified in the Indian Constitution. In ‘The Adivasi Other’, Rudolf Heredia explores the class dimensions of ethnicity and comes to the conclusion that answering the adivasi question will help us address fundamental issues of social equity, ecological sustainability, and people’s participation.

These scholars share a common approach as scientific humanists. It is the vulnerability implicit in the minority status and the ethnicity of these peoples that motivates them to deconstruct this civilizational predicament. One of them explicitly spurns purely ‘pragmatic, operational definitions’. Rudolf Heredia speaks instead of a historical, evolutionary approach. For an understanding of what identity means to anybody, this might be useful, but when Heredia speaks of ‘dignity’ in this context, he is obviously making an a priori statement which might invite the scorn of those academics who look upon all science—even social science—as an amoral, value-free activity. And of course those whose eyes are fixed on the statistics of development as GDP alone (and have an ideological axe to grind) dislike being distracted by ideas of social justice and equity. That does not faze any of these researchers, but that is not to say that their methods of enquiry are any the less hard-nosed for all that.

What marks these studies is an empathy which does not romanticize them as ‘noble savages’, but enables a more realistic view of their present situation as well as of their social and cultural background. To assume that there is nothing of value in their culture shows arrogance. For instance, their women enjoy much more freedom than those in patriarchal, caste societies, They set aside ‘sacred groves’ to preserve forest wealth. Many use water and other natural resources more rationally and sustainably in their cultivation than can be seen among non-tribal societies.

Sharit Bhowmik tells the two century-long story of the tea plantation workers from Chhota Nagpur. Expropriated by dikus (outsiders) brought in by the Hinduized Nagvanshi rulers in the 17th century, and further impoverished when the British introduced the Permanent Settlement, and going through numerous famines and floods, they rose in revolt at least six times between 1795 and 1899. Virtually driven to migrate to tea plantations in the Dooars of Bengal, along with their families, this supply of cheap labour was subjected by plantation owners to a peculiarly oppressive system of surveillance to prevent being enticed to other plantations. Bhowmik relates how unionization brought some positive changes to their situation, but was ultimately bedevilled by the fact that trade union leaders were invariably Bengalis, different in ethnicity as well as class and caste. Invariably regarded as outsiders, not even as ‘adivasis’ (since the term literally means ‘those who were here first’), these Jharkhandi adivasis now have their own Progressive Workers Union.

To the uninformed gaze, the trajectories of political mobilization taken by adivasis seem to disappear into a maze. Archana Prasad traces its many twists and turns in several States, with localized struggles often succumbing to pressures from nation-wide economic and political forces. Yet the aspiration to create a ‘multi-class united front’ continues, she says, and mentions the work of Ganamukti Parishad, the Adivasi Mahasabha, Girijan Sangham, and the Adivasi Pragati Mandal in creating a ‘non-exclusive , democratic Adivasi consciousness’. Will adivasis from all the different parts of the country come together and attract other democratic groups to form a viable political alternative? Adivasis voicing political dissent, even nonviolently, are liable to be labelled Maoist.

‘Today, India’s central forested tribal belt, which is also rich in mineral resources, has the country’s highest concentrations of poverty, as well as left-wing militancy’, observes Madhu Sarin. Several writers in this book offer glimpses of the ‘tiger’ flashing into view over the last fifty years, in State after State. But it is not an animal that can be tamed by social scientists. All they can do is to point to the reasons why it has turned into a threat to the Indian state. The misery caused by multi-faceted deprivation is turning tribal discontent into a habitat for rebellion.

That is a man-eater, if ever there was one.

A journalist and reviewer, Vasantha Surya is a poet, translator and writer of books for children. She has published three books of poetry in English, one of them a translation of a folk poem in Bundeli Hindi. Her other translations include an anthology of contemporary Tamil short fiction, seven modern Tamil novels, and Tamil Dalit poetry. Mridu in Madras, her novel for children, has been translated into Tamil by Prema Srinivasan and herself.