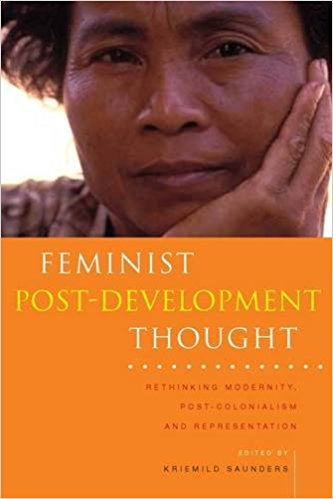 The place of women in development praxis has always been con- tested and troubling. This volume opens out the complex feminist debates in different geographic locations, simultaneously placing before us difference in feminist theorizing and the critical feminist engagements locally and globally with hegemonic forces of development especially over the past three decades. The introduction traces the trajectory of feminist post-development thought from WID (which assumed “the withering away of patriarchal ideology”) through GAD (which was “concerned to unearth gender as an ideological construct”) to southern perspectives on the imperatives of feminist developmentalism, notably DAWN. Esther Boserup’s pathbreaking work on developing a feminist vision of the development process in 1970, which challenged in very fundamental ways the assumption that the benefits of development would trickle down to the poor, by demonstrating women’s declining status provides the starting point for a discussion on the complexity of development debates and the positioning of women therein. Southern and subaltern perspectives present crucial turning points in this debate.

While DAWN is a signpost of southern perspectives, Saunders argues in the introduction there is a sliding of the narrative between poor illiterate southern women, that DAWN represents and the intellectual class that is the vanguard of DAWN, the fact of this separateness between the represented and those that represent being completely masked. She examines the theorizing of the Third World/Southern woman away from monolithic, essentializing narratives after Gayatri Spivak’s work on the representation of subaltern women. An important part of this theorizing has looked at questions of cosmology, colonial residues, regeneration and the idea of modernity itself. Along different points on this continuum there are other signposts that have been prolific in their production of research and practice.

We can perhaps trace the articulation of women’s rights from the early era of emancipation to liberation and finally to “empowerment”—“a slippery word, a chimera that lets everyone feel comfortable—a ‘motherhood’ term with a warm, cuddly feeling” (Papart, p. 52). The emergence of the concept of empowerment in development debates led to the rise of participatory rural appraisal (PRA)—a dynamic set of techniques aimed at enhancing participation and empowerment of the poorest of the poor. However, Papart argues, the fact that the analytical tools of political economy that address questions of state power, institutions, global trade flows were left completely out of the reckoning in PRA resulted in the participation being merely just that without any empowerment or voice in the terms of real, sustainable change.

What then is the road to getting heard? What are the tools with which we may dismantle the master’s house? Taking note of the power of the master’s tools, whether at the local or the global level, mastering them and subverting them to the benefit of women has been one route (open to the accusation of cooptation). Staying on the outside, Kathleen Staudt suggests, will mean that the master’s houses get more hegemonic and powerful. It is only collaboration between the insider and the outsider, broad based transformative coalitions, she says which will challenge, change and transform the institutions that comprise the master’s house. And this challenge to the master’s house from within is something that has a rich history, especially where women have posed this challenge. Through a textured biography of Dolcha Ringmo, a Ladakhi Buddhist woman who spent most of her life in the marketplace in Leh, Raveena Aggarwal presents to us strategic possibilities for the contestation of structural inequalities.

In the section on the feminization of the global economy, opening with an examination of ‘counter-geographies of globalization’ – circuits that are at the heart of the global economy and yet are not often represented as being connected to globalization (p.104). In a context that is increasingly marked by high unemployment, poverty, bankruptcy of firms, and shrinking allocation of resources on social needs, alternative circuits of survival emerge. Saskia Sassen argues that these circuits earn vital remittances for states and present attractive profit making options to those who run them. Trafficking is the immediate example that comes to mind – related to the sex market, the labour market and illegal migration. While sex trafficking and illegal migration multiply the resources of criminal groups, labour market trafficking bolsters up foreign exchange in sending states and helps them cope with unemployment at home.

This putting in place of alternative circuits, and the structured changes in a wide range of areas – socially, politically and economically – prompts Marianne Marchand to use global restructuring instead of globalization. She argues that the processes and transformations that are part of this restructuring tend to result in social exclusion, and are mediated by gender, ethnicity, class and other social factors – producing and reproducing inequality even while creating new opportunities.

In the face of the complexities of development praxis, and the pitfalls even, resistance becomes a central concern. This resistance however, must carefully negotiate a route out of oversimplified dichotomies of the Third World/First World and the language of Otherness. “An ‘alternative’ theory of development,” Marnia Lazreg cautions us, “must take into consideration the fact that people living on the under side of development are our contemporaries, and that to romanticize their circumstances is to do them violence. This is particularly relevant to arguments of cultural preservation or the grounding of identity, which she sees as expressive of the view of development as destruction, not as transformative. A closer look at debates in these “Other” places – China, for instance—demonstrates potentially powerful desires to do away with male dominance through “cultural spaces kept open through seemingly endless bruising struggles (that) feed desires for things beyond our present damaging conditions of gendered power.” (Tani Barlow, p.156) Meera Nanda similarly examines local realities that are particularly oppressive—the example she takes is of caste in India – and the movements of the oppressed, which I will return to a little later.

And yet, in the Andes, ideas of regeneration are predicated on the experience of the earth with all its inhabitants – humans and more-than-humans. Frederique Appfel Marglin and Loyda Sanchez argue that in a society where the notion of person is radically non-essentialist, and not necessarily contained within the biological body, the imposition of developmentalist feminism and its notions of gender is incongruous in its anthropocentrism and its eurocentrism. Scientific discourses coupled with trade practices based on similar assumptions present even greater risks to human survival – the decision of the European Union to lift its ban on possibly BSE infected UK beef to Third World countries. Looking at the trends in the use of science, Vandana Shiva charges that in the “economics of genocide, the largely white male elite of the North creates, class, race and gender boundaries to exclude other social groups from the fundamental human rights to life and safety.” [p. 189] Banu Subramaniam, James Bever and Peggy Schultz, located within the discipline of biology, explore the possibilities of a science that is not anthropocentric and that looks at local ecologies, cultures, histories and geographies in its negotiations of the material and the discursive, so that new conditions may be created which will allow for the realization of a new vision of post-development. The possibilities of science as also the history of arguing in favour of the rationality of modern science—in the Enlightenment mode—is located in anti-caste movements in India – with both Ambedkar and Periyar challenging Brahminical knowledge of the natural world as being unscientific. The scientific temper was seen to be the most effective tool of transformation. “An enabling critique of development,” Meera Nanda suggests, “must engage in a cultural challenge to this inherited discourse of patriarchy, caste and other inequities justified by traditional cosmologies” (p. 223).

Fieldwork has always raised a host of very uncomfortable questions—and has been theorized as well. Development practice has foregounded participatory engagements. Even so, do ‘advances’ in knowledge actually improve the condition of people who enable this ‘participation’? (Patience Elabor-Idemudia, 227-242) The position of the ethnographer, especially when she is located in a dominant group; the accessibility of her research to the people on whose lives it is based; the choices that people make consciously rejecting the structures of dominance – funding for instance; and their willingness to discuss all these questions with the memsahib ethnographer, points to the contradictions of fieldwork as they emerge in Piya Chatterjee’s account of workers in the tea plantations in North Bengal. Tourism has across the world destroyed local economies and distorted them in troubling ways. While violence through widespread sex tourism is one part of this reality, the increasing displacement of men from steady employment, the absorption of women at various levels of the tourist economy and the consequent unleashing of patriarchal violence on women within their homes and communities makes women even more vulnerable. Ramona Perez examines the ritualization of male violence against women during fiestas in Atzompa outside Mexico, suggesting that women perhaps believe that this ‘contains’ domestic violence in reality and provides channels for the venting out of male frustration.

In the concluding section that examines issues related to population control and reproductive rights, Wendy Harcourt discusses the discursive shift in the ICPD in Cairo from population expansion to women’s rights and empowerment; Esther Wangari discusses the ideological underpinnings of debates that link fertility rates to resource depletion, looking at these debates in the context of western consumption patterns and the imposition of harmful reproductive technologies on women of the South; Sylvia Marcos returns to some of the concerns voiced earlier in the volume arising from culturally and politically distinct notions of corporeality in the Meso American region that sets it apart from western notions of the body. The collection revisits important debates and re-examines old questions—a necessary exercise, inconclusive by definition, but valuable in that all the patches are sewn together in one quilt, the seams telling the story of development.