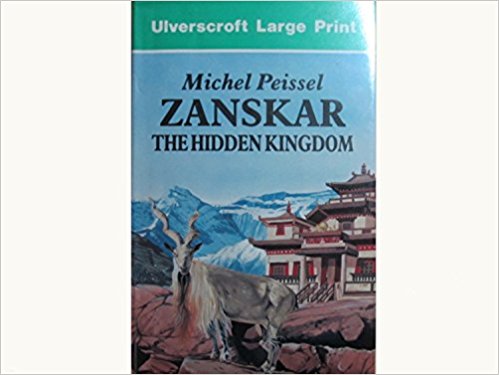 Zanskar was opened to foreigners in the late 1970’s and this is among the first of the travel books which can be expected to follow from the opening of the area. Peissel is well known to those familiar with the travel literature on the Himalayas and his account of a visit to the kingdom of Mustang, remains interesting reading for those concerned with western Nepal and its vicinity. The same however cannot be said for this book on Zanskar which is quite evidently the account of a rushed summer vacation with the clear intention of being among the first in the field with a travel book. The route taken into Zanskar was via Srinagar and Kargil, coming out through the Zanskar Valley through the southern pass to Kulu via Lahul and Rohtang. The Zanskar Valley, located in a trough between the folds of the Great Himalayan range and the Zanskar range comes into historical perspective at the start of the second millennium A.D. with the establishing of a series of monasteries in the occasional patches of cultivable land on the edges of the river such as at Zangla and Padum, patches which are scattered across an otherwise inaccessible, bleak terrain of bare rock. Earlier links with Kashmir are suggested in the Zanskar Chronicles but these have yet to be estab­lished.