A Thesis with Many Holes 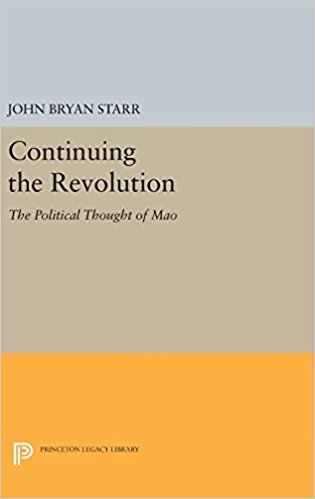 Mao Zedong was the most dominant and towering actor in the long drama of the Chinese Revolution. His ability to interface the universals of Marxism­-Leninism with the particularities of China created a profound organic rela­tionship between the man and the event which he himself acknowledged. In March 1964 he remarked: ‘The Selected Works of Mao, how much of it is mine? It is a work of blood … These things in Selected Works of Mao were taught to us by the masses and paid for with blood sacrifice.’  That Mao was able to move and mobilize the masses and keep them with him, often in defiance of legitimately constituted Party authority, is acknow­ledged. The why of it is more difficult to explain. Writing in 1937, Nym Wales, who followed her husband Edgar Snow to Yenan, surmised that Mao had grasp­ed a large portion of the truth of human, and particularly Chinese, existence.From today’s perspective, history has partially borne out her surmise: The Chinese Revolution was a success story. However, Mao and his Thought have now run into grave problems. The post­-Mao leadership is distinctly uncomfor­table with certain aspects of his Thought, particularly those which warned of intense class struggle during the period of socialism.

A section of the new leader­ship seems determined to make the Cultural Revolution the cut-off event separating Mao’s achievements from Mao’s failures.

John Bryan Starr makes his own opi­nion quite clear. His study rests, as he states in the Preface, ‘on the assumption of the historical importance of Mao’s political career and, without raising new claims for the truth, originality, or appli­cability of the political ideas that grew out of, and in turn shaped, that career, proceeds on the further assumption of the intrinsic, historical importance of those political ideas.’

The central purpose of the book, into which has gone over a decade of careful and dedicated research, is an exploration into the idea of ‘permanent revolution’. The Chinese began, he says, to refer to this idea as ‘Chairman Mao’s theory of continuing the revolution under the dic­tatorship of the proletariat’ in the 1960s. In short, Starr, like Stuart Schram before him and others after him, views the later theory of ‘continued’ or ‘uninterrupt­ed’ revolution as being only a restate­ment of the earlier (though non-Trots­kyist) idea of ‘permanent revolution.’

I have grave problems with this view­point. The theory of ‘continued revolu­tion’, like the concept of ‘permanent revolution’, undoubtedly stems from Mao’s application of the law of contra­dictions. But it is precisely the ability to creatively analyse the changing con­crete situation by the application of this law that is so rare in a Marxist. By all accounts Lenin had this gift which mani­fested itself not only in his dynamic leadership of the Russian Revolution but also in the creation of new theories on imperialism, colonialism and revolution. So, apparently, did Mao, thus also laying claim to theoretical creativity.

Limitation of space does not permit a long explication of my disagreement with’ the- Schram-Starr thesis. In brief, until about 1961, Maoist use of the idea of ‘permanent revolution’ belonged in the classical mould. It referred to the need to push the revolution ahead from the new democratic to the socialist stage under the dictatorship of the proletariat in the form of an alliance between the working class and the peasantry. And Mao, Like Lenin before him, had achiev­ed this. Neither revolution was arrested at the bourgeois-democratic stage. This is important to remember, for ‘revolu­tion’ was taken to mean a painful violent emergence into socialism from capitalism. The further transition to Communism, it seemed to have been assumed, would be both painless and ‘natural’ since socialist society would not suffer class conflicts.

Mao seems to have held this view till fairly late. In March 1957 he still main­tained that ‘the large-scale and turbulent class struggles of the masses, charact­eristic of the previous revolutionary periods, have in the main come to an end … ‘ Nevertheless, he had a running disagreement with the Soviets and with those at home who refused to even coun­tenance the existence of social contradic­tions in a socialist society. He condemned the view that the principal contradiction in a socialist society was between ‘an advanced socialist system and the back­ward productive forces’. Nor could he agree with Liu Shaogi that in China there would be ‘no more socialist trans­formations.’ Both these propositions violated his understanding of dialectics and his identification of contradictions in a socialist society. Moreover, he argued that there was no such thing as an advanced social system. Changes in the super-structure, he said, had always preceded, not followed, changes at the base. ‘Our Revolution’, he reminded his comrades, ‘began with making propa­ganda for Marxism-Leninism.’ It was to rectify these erroneous views that in 1958 Mao urged the establishment of the communes, a profound transforma­tion of the superstructure.

The domestic debate, however, was intertwined with a new phenomenon in the international Communist movement. From 1958 to 1961 Mao took stock of what was happening in the Soviet Union. And, after the 22nd Congress of the CPSU in 1961, he concluded that the emergence of ‘modern revisionism’ was no longer only a ‘trend’. It had now  been developed ‘into a complete system’.

The Soviet retrogression had to be explained in practice and in theory. In January 1962, Mao offered a two-fold explanation. One was classical Leninist: ‘The reactionary classes which have been overthrown still seek a come-back.’ The second was novel: ‘In a socialist society new bourgeois elements continue to emerge.’ Both, he would argue, find

strength and sustenance from the forces of international reaction and the interna­tional bourgeoisie. Now, this was a start­ling explanation; for Mao was saying, in effect, that a new bourgeoisie—as a class—would arise even in a socialist society where ‘the system of exploitation of man by man had already been destro­yed, and the economic base of the bour­geoisie done away with …’  If the new fact that classes, class contradictions and class conflict exist even in a socialist society was not recognized, he warned, the consequence would be a restoration of the bourgeoisie and the ultimate un­doing of the revolution. This was a far cry from the position he had held in 1958. And, drawing further conclusions, Mao advanced the remedy: ‘Our instru­ments of dictatorship must be strengthe­ned, not weakened.’

This summation was then tested in practice. Mao reframed the Basic Line in September 1962; initiated the Socialist Education Campaign to educate not only the Party but the whole of society, to recognize the existence of class struggle, in 1963; and undertook the Great Prole­tarian Cultural Revolution with the avo­wed purpose of seizing power from the ‘capitalist roaders’ in the Party, in 1964. Only then, that is, only after practice he thought had confirmed the validity of this summation, did Mao formulate a theory of ‘continuing the revolution under the dictatorship of the prole­tariat.’

This theoretical formulation was offered as a major and creative contri­bution to the corpus of Marxism-Leninism. It was also an attempt to define and codify the first of the ‘laws of socia­list construction’, that is, that classes exist even in a socialist society. Thus, as a contribution to Marxist theory, it was as different from the earlier idea of ‘permanent revolution’ as was Lenin’s theory on imperialism and proletarian revolution in colonial countries from the original Marxist idea of proletarian revolution in a full-blown capitalist society.

It is, in fact, rather surprising that Starr, like Schram before him, did not highlight and explore this difference. Both laid stress on the first part of the formulation (continuing the revolution) and ignored the second half (under the dictatorship of the proletariat). Both also failed to locate the theory in its pro­per practical, historical and international context. And both failed to counter-pose it with its dialectical opposite—the emergence of modern revisionism within the international Communist movement.

Starr’s painstaking research has much to offer by way of individual detail. One major omission is that he has not discus­sed Mao’s changing identification of the principal and major world contradic­tions on which so much of Chinese prac­tice, both domestic and international, was based. Consequently the sum of the parts of this book do not make a whole.