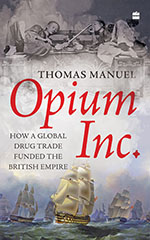 One of the aspects studied by scholars of globalization is its antiquity. Questions have been asked about whether globalization is a novel phenomenon from the 20th century, or merely varying manifestations of an old pattern over periods of time. Convincing arguments have been made on either side. One pattern that is undeniable is the search for products, profits and resources, all contingent upon control of people and territory. Capitalism, colonialism and globalization, when viewed in this way, have been intermeshed for several centuries, thus providing evidence that globalization, riding on decidedly dubious processes, is hardly new. It gives the lie to the manufactured excitement implicit in phrases such as ‘globalization is a buzzword’, a favourite way to open a speech or a piece of writing where more creative opening lines may be elusive.

The histories of products such as spices, tea, sugar and cotton have brought these entrenched patterns to light. Thomas Manuel adds to this repository the history of opium, by far the most damning product, in his book Opium Inc.: How a Global Drug Trade Funded the British Empire. The author, a freelance journalist and an award-winning playwright, has captured the story of the complex networks and politics that turned opium into a mass drug easily accessible, and shaped the course of history in the most tragic way.

Manuel’s starting point is the history of the use of opium mostly as a recreational drug in ancient societies such as Greece, Rome, Persia and South Asia. It was the Portuguese who viewed it as a tradable commodity, but the Dutch East India Company has to be credited with starting a flourishing drug trade, ably taken over in the service of colonialism subsequently by the British. As is to be expected, the history is terrible. The British took control of vast poppy growing parts of the plains of North India, and pushed more and more landlords and farmers into poppy cultivation. The process was institutionalized by the setting up of opium manufacturing factories, a bureaucratic infrastructure and naval facilities to transport the product to China. Parallel to this, Malwa became an alternative centre for poppy cultivation and manufacturing. Malwa opium would pass via Daman, Karachi and Bombay. The loss of revenue for the British via the Calcutta-based trade was sought to be curtailed by entering into treaties with the Maratha Confederacy, but this strategy failed. Eventually, the British allowed private trade via Bombay for a small fee, which made the trade further profitable. Business houses belonging to influential British, Parsi, Jewish and Marwari traders facilitated the distribution of opium to China. These family-run enterprises would soon evolve into powerful conglomerates that became synonymous with the establishment of Bombay as a centre of finance and culture.

China, on the other hand was ruled by a once powerful, now weakening empire, and conditions were ripe for colonizers to make their way in. The continuous supply of opium in China was first sought to be controlled by its rulers. Eventually, when the deleterious effects became more and more apparent, it was sought to be uprooted completely. This of course, was a threat to the profits of the British colonizers. So, when the Chinese set fire to a large consignment of opium to show their disapproval, the British retaliated with the Opium Wars. The wars not only entrenched the opium trade but let the British make further inroads into China.

A slow opposition led by Christian religious leaders in response to the use of opium in China, on moral grounds, led to the creation of a commission in Britain. This commission, comprising British and Indian members carried out its task, and in time-honoured fashion, arrived at conclusions that enabled the continuation of opium trade. The author sheds light on the Indian National Movement’s position on this question. The Congress-led movement was reluctant to decry the opium trade on economic grounds. The only exception to this was Dadabhai Naoroji, who remained steadfast in his opposition to the ruinous and reprehensible trade.

It was the entry of the United States of America in the imbroglio that furthered the move towards ending the opium trade worldwide. Roosevelt initiated a commission to look at the impact of opium in the Philippines. This kickstarted an entire legal regime over a period of time, comprising multilateral and international commissions to recognize the harm caused by opium and phase out the trade. The book also draws linkages between the slave trade that drove the cultivation of cotton and sugar, and in a more cheeky vein, looks at how several literary figures have engaged with the drug, both in terms of imbibing it or making it a subject of their creative ventures. Finally, the book ends with a look at the opioid crisis that is wracking several parts of the world, from America to India.

Manuel’s book presents the research in an accessible way. The study of the opium trade is not entirely new. Several historians have dedicated research space to varying sociological and political aspects of opium. Manuel has deftly collated this information, added a fair amount of primary research, and written the story in an easily readable form. The language used is contemporary and direct, which is a great strength of this work. For instance, at the very outset, he states:

This makes the Honourable East India Company a drug cartel masquerading as a joint stock corporation masquerading as a government. The British Raj in the nineteenth century was a narco-state—a country sustained by trade in an illegal drug (p. xii).

Putting the central hypothesis of the text front and centre makes the rest of the story intelligible to the reader. The book is organized into thematic chapters that further aid the grasping of the politics of opium, from a range of vantage points. No set of actors is missed out, presenting a holistic picture of what is essentially dirty business. It also helps the reader see what a vast and collaborative exercise this was. One can pin down some key characters and institutions that aided and abetted the business though. In the process, gains were made, both personal and business, new conglomerates built, and networks of cities at the fulcrum of this trade flourished. The immense wealth generated disincentivized pulling back or ending the trade, till such time that the norm started changing, albeit at a snail’s pace.

The author has given equal attention to the victims of this business. The worst faring are the farmers in India who were compelled to shift cultivation from other crops to opium, because that is what the colonizer demanded, and hence that is also what brought in any income. They were caught in a web of traditional power relations and the power exerted by modern bureaucratic structures, in the end gaining nothing and losing everything. Similarly, the condition of a drug-addled population in China was pathetic, to say the least. It was a humanitarian crisis. The current narcotics crisis can be traced back to this sordid tale.

Through the book, the readers get yet another lucid page in the study of how the wheels of capitalism and globalization move. The tangled web is reminiscent of Manuel Castell’s theorizing of the network society. Cheekily penned by the author, deploying the story-telling skills of a playwright and combining it with serious research, this book is a must read for both the specialist and general readership.