A Tale Of Fact And Fantasy 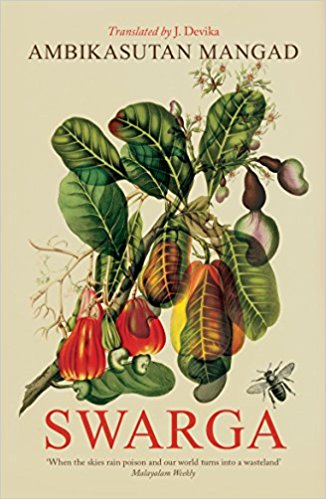 In its skeletal form Swarga is the story of an environmental crime that occurred in Kerala; an account based on the author Mangad’s observations. It is a true story   of the horrors inflicted on the environment by the official use of endosulfan—a banned insecticide and acaricide—that was sprayed to destroy the ‘tea-mosquito’ a nonexistent pest that supposedly destroyed plants. The real reason was that endosulphan was beneficial to the growth of Kerala’s lush cashew plantations, all of them owned by the higher echelons of society.

This account of destruction (common enough to modern readers) is presented in the garb of a novel—a well-written attention-grabbing tale of a fictitious place called Enmakaje in the Jadadhari  Hills of Kerala. Neelakantan and Devayani, two ruined misfits of society, retire into the Hills, renounce their identity and become anonymous as Man and Woman. They decide to eschew all company and live in total isolation. They succeed for some time, but when Woman ‘adopts’ an abandoned baby their pact is broken.