A Sub-culture in the World of Music 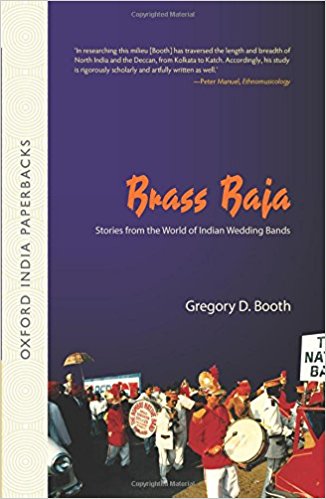 A Sub-culture in the World of Music
Prabhu Ghate
BRASS BAJA: STORIES FROM THE WORLD OF INDIAN WEDDING BANDS by Gregory Booth Oxford University Press, 2006, 335 pp., 595
January 2006, volume 30, No 1

As a researcher and participant in an anti-poverty project in eastern UP in which we were trying to come up with suitable livelihood activities for the 40 percent of the population that was totally landless and dependent on agricultural labour, a surprising item would appear in the list of activities that dalit members of the target group expressed an interest in taking up. This was “band-baja”. It turned out that many of them already had some experience of participating in processional wedding bands, which were stuck with the label of being a caste-based activity (like most other activities undertaken by the dalits at the time). This led me to note the parallel with jazz, at least superficially. Jazz evolved in its early days partly out of processional music, funeral processions in this case, and like Indian brass bands was syncretic in musical origins. It built upon cotton-picking field chants, gospel, and African rhythmic traditions, just as Indian brass bands drew on western military, regional folk, and increasingly, filmi music. But the most striking similarity was the low status of the musicians, not just along race/caste and economic dimensions, but also initially, musically.