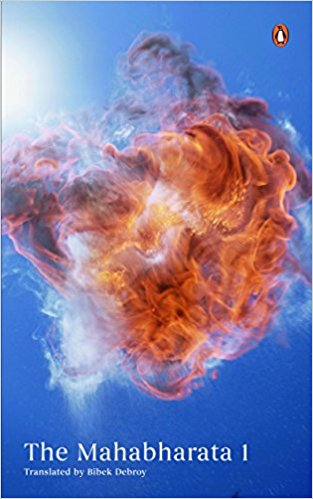 Mahabharata, which literally means ‘the great story of Bharat dynasty’ is part of the Hindu itihas, i.e., ‘that which happened’. It is an extraordinary story of sibling rivalry, diplomatic manoeuvring and shifting of human values culminating in a direct confrontation on the battlefield of Kurukshetra between the five sons of King Pandu (Pandavas) and the hundred sons of King Dhritarashtra (Kauravas). It is a tale of tragic war which pitted brothers against brothers, sons against fathers and students against teachers. Exceptional characters, in-depth and complex set of interwoven relationships and dramatization on a grand scale make this epic a memorable one. It is also a saga which marks the end of an era (Dvapar Yuga) wherein characters lived up to morals, values and principles to the beginning of an era (Kali Yuga), wherein selfishness, deceit and immorality rules the roost.

Besides the compelling drama and riveting plot, Mahabharata is unique in many ways. Larger than life characters including that of Lord Krishna, considered an incarnation of Lord Vishnu; Bhishma—great-grandfather of the principal warriors, who pledged to serve the kingdom of Hastinapur and ended up being a silent witness of its fall; Arjuna—unparalleled archer, who laid down his arms at the beginning of the war, Karna—illegitimate son of Kunti who ended up in the enemy camp due to misfortune; Yudhishthir—an icon of truth who was compelled to lie under his breath to win the battle; Duryodhan—son of the blind king whose insatiable ambition became the root cause of trouble; Dronacharya —accomplished teacher, who was compelled to fight against his favourite student Arjuna—all make this epic spectacular and fascinating.

Every single incident of the Mahabharata is full of twists and turns—be it the game of dice between brothers or the thirteen years’ exile of the Pandavas to the forest with a condition of anonymity for the last year, or a mysterious fire in the house of wax and the Pandava’s miraculous escape from there, or the laying down of arms by a disheartened Arjuna in the battlefield, that resulted in Lord Krishna expounding the Bhagavad Gita or the dexterity of Krishna in navigating the Pandavas to victory and beyond. In a way, Ramayana and Mahabharata form the very basis of cultural consciousness that symbolize Hinduism. It is not surprising that the Mahabharata has attracted tremendous interest among both the literates and the laity alike of India and East Asia as well as pundits and philosophers all over the world.A timeless creation of Sage Ved Vyasa (who himself is one of the characters of this epic) and one of the longest poems of all times, Mahabharata is divided into eighteen books or chapters (called Parvas) beginning with Adi Parva and ending with Swargarohana Parva. In another form of classification it contains 98 Parvas, beginning with the Anukramanika Parva and ending with Swargarohana Parva.

Contrary to popular impression, that the epic must have been translated innumerable times, unabridged and complete translations of the Mahabharata in English are rare. There are many condensed versions, a complete bibliography of which was provided by P. Lal in the 1980 edition of his condensed translation. As far as this reviewer is concerned, apart from Kashiram Das’s Bangla adaptation which one grew up with, the condensed version in English which made a profound impact on me was by C. Rajagopalachari (1951). It contains a selection of over one hundred of the more interesting stories and episodes with interspersed comments. The book is a joy to read. The quality of his English style is on a par with that of the finest English writers, and his vivid and dynamic versions of these stories capture much of their humour and poignancy, and have real vigour, sparkle and human interest.

However, there are only five unabridged translations of the epic till date—by Kishore Mohan Ganguly (1883–96), by Manmatha Nath Dutt (1895–1905), by the University of Chicago and J.A.B. van Buitenen (1973 onwards), by P. Lal and Writers Workshop (2005 onwards) and the Clay Sanskrit Library edition (2005 onwards). Of these, P. Lal’s is more a poetic transcreation than a translation. The language of Ganguly and Dutt translations is now archaic. The most unsavoury feature of Ganguly’s style, apart from its literalness, is his employment of archaic forms such as ‘Thee’, ‘Thou’ and Thine’ etc., forms which can at times grate on the modern sensibility. And yet, one must give it to Ganguly that his translation was always lively and never wooden; he seems really to have caught the spirit of the Mahabharata. His version, though it requires time and patience to read, has great energy and succeeds marvellously in capturing the many interesting and colourful characters of the epic, and in vividly portraying the weird and wonderful things they do. Almost three decades later, the Chicago University version is still not complete, and the Clay Sanskrit Library edition, not being translated in sequence, is still in progress.

Against this backdrop comes the welcome new translation of Bibek Debroy which is complete in all respect. In his Introduction, however, Debroy holds forth that the primary reason for venturing into yet another translation of the Mahabharata is not just the vacuum that exists, but also reason for dissatisfaction with other attempts. He playfully asserts in a parenthesis, ‘while translating 80,000 shlokas is a hazardous venture, since Ganguly, Dutt and Lal are Bengalis, surely a fourth Bengali must also be pre-eminently qualified to embark on this venture.’ P. Lal lived and worked in Kolkata his whole life, but I have heard him declare at least twice in two seminars: ‘I am a Punjabi.’ Hence, I wonder if the Bengali identity attributed to him will be acceptable to him or not.

The text followed in this translation is what has come to be known as the critical edition, that is, the one produced by the Bhandarkar Oriental Research Institute, Pune between 1919 and 1966. Before this, many different versions or recensions of the Mahabharata created a confusing situation. This authenticated text produced by a board of scholars seeks to eliminate later interpolations, unifying the text across the various regional versions. We have grown up with the knowledge that the original Mahabharata has 100,000 shlokas. But, interpreted in terms of Bhandarkar Institute’s critical edition, the figure comes down to a little short of 75,000. and when Hari Vamsha is included, as the critical edition includes it in a separate volume, the number of shlokas increases to a little less than 80,000. This what Debroy closely follows.

The translator is however alive to the fact that there are reasons for dissatisfaction with the critical edition too. For example, the text is not invariably smooth. Sometimes, the transit from one shloka to another is abrupt, because the intervening shloka has been weeded out. With the intervening shloka included, a non-critical version of the text often makes better sense. Debroy has pointed out a few such occasions in his exhaustive notes, much to the benefit of the readers. As a matter of fact, the Debroy edition is extremely well-organized, and has a substantial and helpful Introduction, plot summaries and notes. The volume is a beautiful example of a well thought-out layout which makes for much easier reading than the cluttered pages of Ganguly and others.

The first volume begins with a list of contents and a summary of everything that is in the Mahabharata. Since the Mahabharata as a story was recited at Janamejaya’s snake-sacrifice, there is a digression on serpents, Takshaka and the stories of Poushya, Puloma and the Bhrigu lineage. Why were the snakes slaughtered at the snake-sacrifice? That takes one to the story of Garuda and how Astika saved the snakes. After this, one learns how the gods and demons are incarnated on earth and there is an account of the genealogy of the Kouravas and the Pandavas, with the stories of Shakuntala and Yayati. The Kourava and Pandava princes grow up and the enmity between the cousins develops. The Kouravas try to burn the Pandavas by setting fire to the house built of lacquer in which the Pandavas reside and the Pandavas slay the demons Hidimba and Baka. The Pandavas encounter a gandharva named Chitraratha and we learn about the enmity between Drona and Drupada. After digressions on Tapati and Vasishtha, Droupadi’s wedding takes place and
the Pandavas are given a share of the kingdom.

I have two minor issues with this otherwise excellent work of translation. First, the absence of diacritical marks. Diacritical marks are integral to such work, as they make the translation and pronunciation more accurate. If this internationally accepted system of Sanskrit-English transliteration is not followed, there is bound to be confusion, especially for foreign readers, of whom this book will surely have a substantial number. In P. Lal’s single-volume condensed translation of 1980 also diacritical marks were omitted in the main text, but were included in the Glossary and Bibliography. That diacritical marks ‘often put the readers off’ is a known argument, especially in the corridors of multinational publishers operating in India for whom ‘reader-friendliness’ is the ultimate yardstick. Hence ‘sacrificing academic purity, there is thus a conscious decision to avoid diacritical marks’ does not sound a strong enough defence from the translator. He himself is not unaware of the kind of confusion that would arise between Krishna as in Draupadi and Krishna as in Vasudeva, in the absence of diacritical marks. The second issue is the occasional jarring of the language because of the syntactical preference chosen by the translator. If a metaphor in the original Sanskrit shloka occurred at the beginning, the translator has mostly tried to retain it at the beginning of the English sentence also. One can appreciate his desire to retain the flavour of the original, but at times it has made the English sentence structure rather topsy-turvy. Sacrificing the smoothness or compatibility with the target language idiom to the altar of absolute accuracy may not always be the best strategy for translation