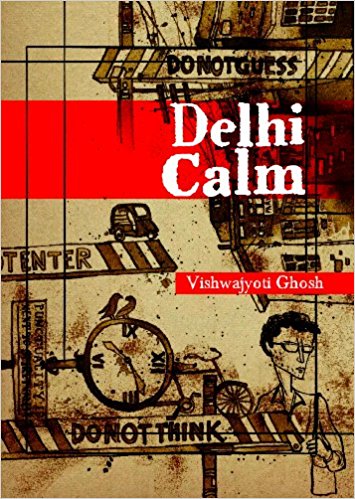 History, notoriously, is not about the past.-Amitav Ghosh in The Man Behind the Mosque
Vishwajyoti’s Ghosh’s Delhi Calm reminds one of the daily calm that is being witnessed along with the daily alarm of scams, jams, inflation and general deflation of spirits. The phrase ‘India shining’ was the buzzword a few years back. A friend says that the then Prime Minister used to take long pauses between words during his speeches, and so what he had actually said was ‘India shining…(long pause)…shoes’. The friend tells that by the time the Premier reached his last word, journalists had left to air breaking news.

Ghosh’s sepia-tinted graphic novel about the Emergency of 1975 captures this long pause between ‘India shining’ and ‘shoes,’ through the story of young men seeking a change in the society through the ideals of the Prophet (Jayprakash Narayan) who is pitted against an authoritarian Moon (Indira Gandhi) who thinks that ‘democracy not only throws up the mediocre but also gives strength to the most vocal, howsoever they may lack knowledge.’ The lonely Moon used to pasting pictures of all the stars in her scrapbook-her loneliness is vividly drawn through an absent father from whose letters she learnt about world history-is a centripetal force trying to draw everything towards her with the assistance of her son Prince (Sanjay Gandhi), while the Prophet believes in a starlit galaxy-decentralization of power with gram panchayats wielding power locally and thus strengthening people’s share in the power nationally. This conflict between the lonely Moon wanting to become the sole source of light, and the dream of a starry firmament is at the heart of this work. It is proclaimed that Moon is Motherland, and Motherland is Moon in 1971. The writer is obviously referring to the barely known D.K. Borooah’s much known statement ‘Indira is India and India is Indira’ and subtly showing how both parts of the late Premier’s name were used to great rhetorical advantage.