A Poet’s Vision of the World 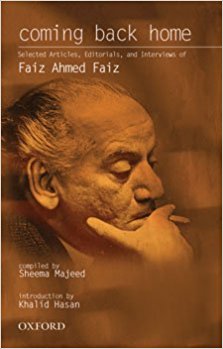 ‘Politics and history are interwoven, but not commensurate,’ said Lord Acton (1834-1902) in his inaugural lecture as Regius Professor at Cambridge in 1895. So also are politics and prose, and, in the worst of times, politics and poetry. There can be no better example of this axiom in the twentieth century than the writings of the revolutionary Urdu poet, Faiz Ahmad Faiz. While most readers in South Asia are familiar with his poetry, few would have read his writings in English. Faiz wrote, prolifically and compellingly, on the events that shaped the destiny of the subcontinent. Coming Back Home gives the English reader a sampling of the poet’s prose writings—a selection of newspaper editorials, articles and interviews compiled by Sheema Majeed. The title, however, is a bit of a mystery for many contributions—arranged in no particular order—pre-date his exile and years away from Pakistan. The very first entry is an editorial from The Pakistan Times entitled ‘What Price Liberty?’ written in April 1948 long before the jail term and the spells away from home. No attempt is made to explain the title—neither in the publisher’s blurb on the jacket, nor in the Introduction by Khalid Hasan. Hasan’s memoir, coming nearly at the end of the book, however, does talk of the years after 1982 when Faiz returned to live in Pakistan.

The small matter of the title aside, the book is a compact little treasure-trove for it illustrates better than many bigger tomes would the depth and range of Faiz’s concerns and interests. Not only is the English prose much like Faiz’s Urdu poetry, hard-hitting and passionate, it is concerned deeply and ardently with the past and the present; like his poetry it looks at the future with hope and not just a little foreboding. Unlike the poetry however—and I say this with some trepidation for Faiz is revered by legions of admirers across the globe,