A Moral Text For All And For All Time 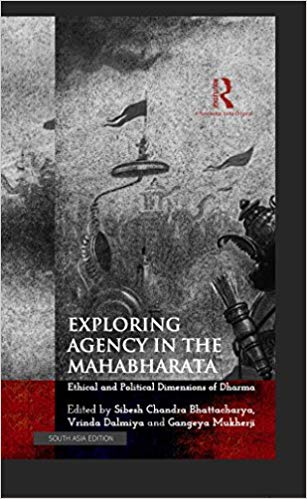 A Moral Text For All And For All Time
Kanad Sinha
EXPLORING AGENCY IN THE MAHABHARATA: ETHICAL AND POLITICAL DIMENSIONS OF DHARMA by Sibesh Chandra Bhattacharya Routledge, London and New York, 2018, 253 pp., 895
June 2019, volume 43, No 6

Few texts in history have generated as much debate around philosophical and ethical issues as did the ancient Indian text named the Mahabharata. Its huge size, encyclopaedic nature, and openness in discourse has turned the Mahabharata into an archive of diverse thoughts and viewpoints prevalent in early India, alongside the extensive period of the composition of the text, ranging over a millennium if not more. The composition of the Mahabharata is usually dated between 500 BCE and 500 CE, dates which were almost certainly preceded by a long existence of the text as an oral tradition which possibly originated between the tenth and eighth centuries BCE. Though the text underwent several revisions, additions, interpolations and alterations over its long journey, the issue of dharma remained one of its central questions. Dharma, which can be loosely translated as the proper way of living, has been perceived as a guiding principle in an ideal life in the Mahabharata. However, the text also repeatedly proclaims the fluidity, subtlety, uncertainty and multiplicity of the meaning of dharma. This has kept the text open ended where various viewpoints could coexist and interact, turning it into an intellectual mine to explore for the thinkers even of much later times.

Despite the pluralism in the ethical world of the Mahabharata, the text is relentless in its advocacy of ‘action’. This has made many scholars interpret the text as a Brahmanical response to the heterodox ideas where renunciation of all actions has been preached as the cardinal virtue. The Mahabharata accepts, even valorizes, renunciation in certain sections. But, in the greater part of the text, dharma is informed by actions and their consequences, and the supremacy of action (karman) is emphatically proclaimed over non-action (naishkarmya) in the Bhagavad Gita,the most celebrated didactic section of the text. If we consider the centrality of action in the Mahabharata, the question of ‘agency’––something that distinguishes an ‘action’ from an ‘event’––is bound to be essential to understand the text. However, interestingly, the Bhagavad Gita while extolling action, says in the same breath that Time (Kala) has already performed all the acts, while the ‘actor’ is not an ‘agent’ but a mere instrument (nimittamatra). Time being the originator and final arbiter of human action is a trope invoked throughout the text. The very theory of karman theoretically accepts a possibility where the inclinations and activities of a person might have been determined by her acts of the previous birth, leaving little scope for agency. The debate between determinism and freedom of action, also a key question in western philosophical thought, is thus very much important and relevant to understand the Mahabharata. The book Exploring Agency in the Mahabharata engages thoroughly with the central premise of this debate, the duality of purushakara (human effort) and daiva (destiny), and extends its scope to incorporate the issues such as the agency of women, the role of agency in pedagogy, even the question of the agency of the non-human species.

Vrinda Dalmiya and Gangeya Mukherji, in a fascinating Introduction, contextualize the central questions of the book, and point out that the text offers no simple solution to the problem of destiny and free-will. Rather, as Nick Sutton has said, it offers different perspectives each of which contributes to the development of the reader’s comprehension. It has been pointed out that agency invokes choice and thus responsibility. However, in the Mahabharata, a simple compatibilist explanation of agency in a causally determined world––on the basis of choice and responsibility––cannot be sufficient because the question is enfolded in its dharmic context. Even though the Mahabharata’s support for the pravrtti (pertaining to action) values is beyond doubt, agency is seen as a pursuit of dharma. This complicates the problem further. Because of the prevalence of the varnasrama dharma which provides undeviating norms for the human agent and is a social hierarchy, the agent is born in an unequal society and the very element of ‘choice’ in the field of dharmic action becomes limited. Moreover, the Bhagavad Gita while celebrating dharmic action, calls for undercutting any sense of the action as ‘mine’, complicating the issue of responsibility for a seemingly free act. The editors, while addressing all these problems, point out that the dharmic  vision rejects a thick sense of identity rather than rejecting agency. The dharmic actor performs action motivated by its rightness, not by its fruits, and the ‘rightness’ of action is very much dependent on the choice/judgment of the actor. Therefore, the editors, following Jonardan Ganeri, rightly point out receptivity––a disposition that makes sense of a value in terms of others and grasps their contextualized significance––as a crucial quality for dharmic action. Thus, when Drona was killing numerous ordinary soldiers, and telling him a ‘lie’ about his son’s death was the only way to stop him, Krishna deprioritized literal truth because other values like compassion and heroism affected what truth-speaking meant in that situation. What truth amounts to is conditional on all the intrinsic values relevant in the specific context. The ‘receptive’ agent sees this and transforms contextualism into a deep, moral particularism. Krishna, being receptive, was open to reconstituting the meaning of ‘truth’ creatively. However, the rule-fetishist Yudhisthira is unable to see the positive ethical quality in the ‘lie’, and utters a convoluted truth. There he misses what is dharma, either in terms of truthfulness or in terms of receptivity, and commits a sin. The Mahabharata, despite advocating unattached/desireless action, does not exempt the actor from the ensuing responsibilities. Rather, one has to bear responsibility even for unintended results of an action in an uncertain world. Thus, context-dependent sensitivity of action is crucial to the text, creating an open-ended space that makes it a moral text for all and for all time.