A Fugue with Fourteen Cantos Across Four Movements 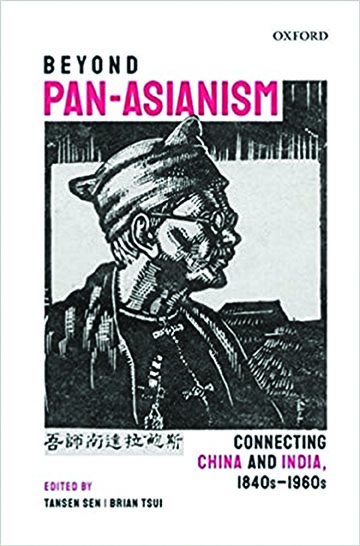 Pan-Asianism is a general term used to describe a wide range of ideas and movements that called for the solidarity of Asian peoples to counter western influences in the late nineteenth and early twentieth centuries. The concept of Pan-Asianism first emerged in Japan sometime in the late 19th century. The movement gained wider acceptance following the defeat of Russia in the Russo-Japanese War (1904–1905).  Poets and philosophers like Rabindranath Tagore and Sri Aurobindo, as also the Chinese politician Sun Yat-sen and subsequently, Lee Kuan Yew and Mahathir Mohamad,  were some of its notable adherents. Subsequently, in the post-war years, after the Indian Independence and the Chinese Revolution, and perhaps also as a result of or in order to recover from, the blinding impact of the India-China border conflict of 1962, more nuanced and differentiated scholarly approaches also started emerging.

The book under review aims to develop an interdisciplinary corpus of research on historical and contemporary relations as well as comparative studies of the two nations and thus go beyond the obsession with strategic, geo-political, economic and environmental issues. It purports to build instead a more holistic understanding of the relationship between the two nations.

The authors therefore attempt to answer the question of how the India-China connectedness in the modern period should be narrated. The period selection, 1840s-1960s, is based on the fact that it witnessed the rise and the decline of Pax Britannica, the growth of multiple and often competing anti-colonial movements and the entrenchment of the nation-state system. By this time, the centuries of exchanges between these two ancient civilizations, from trade along the Silk Road and Buddhism’s journey to China, to maritime interactions had long ended, due to the dominance of the European colonial powers over the routes that had earlier linked them but yet had left behind memories and an after-taste of a shared past. The Opium War and the Treaty of Nanjing in 1842 not only brought new contact but also mutual learning as both went through ‘multiple phases of turmoil, conflict and anti-colonial resistance’.

The text narrative makes a case that the ‘pan-Asian’ lens to understand historical India-China engagement is inadequate in capturing the diversity and complexity of interactions that took place in this period. It does this by assembling a fascinating collection of essays that explore lesser-known facets of engagement during this key period and thereby push the reader to rethink how we understand the actual spectrum of engagement which was far more complex and diverse, even rife with its own inherent contradictions, than is often understood. The reader is thus led on to appreciate that the complexity of interactions which existed, in truth, defies easy labelling.

The fourteen essays of this book are grouped into four sections: ‘Epistemological Interventions’, ‘Encounters and Images’, ‘Cultures and Mediators’ and ‘Building and Challenging Imperial Networks’. These are bound by a detailed introduction and an analytically thoughtful epilogue by the Oxford series editor. The quality of a deliberately variegated collection of essays is best evaluated through the credentials of the editorial team, which here, are seen to shine.  Tansen Sen is a Professor of History and Director, Centre for Global Asia, NYU, Shanghai and Global Networker Professor NYU, New York. He received his MA from Peking University, China and PhD from the University of Pennsylvania, Philadelphia, USA. He has authored/co-authored several books including Buddhism, Diplomacy, and Trade: The Realignment of Sino-Indian Relations, 600-1400 and India, China and the World: A Connected History. He is currently co-editing The Cambridge History of the Indian Ocean, Volume 1 as also working on a book on Zheng He’s maritime expeditions of the early 15th century. Brian Tsui is an Associate Professor in the Department of Chinese Culture at the Hong Kong Polytechnic University, China and is interested in the intersection between revolutionary politics and mobilization of cultures on both the Left and the Right in China’s twentieth century. His first book, China’s Conservative Revolution: The Quest for a New Order, 1927-1949 studies mass politics under the Kuomintang, the dilemmas confronting Chinese Liberal intellectuals caught between an authoritarian state and a supposedly untameable populace, and the Nationalist party’s appeal to Pan-Asianism as a strategy to garner international support. His current research focuses on the advent of ‘New China’ as an Asia-wide event, zeroing in how the early People’s Republic of China was interpreted by Indian nationalists and Asian Christians in the 1950s. Then again, the fourteen contributors, from India, the West and the Chinese-speaking world cover a tremendous breadth of figures, including novelists, soldiers, intelligence officers, archivists, among others deploying published and archival materials in multiple Asian and western languages.

The essays explore not only well-known events such as Tagore’s visit to China, but also less well-discussed episodes such as Zhang Ke’s essay revisiting the late Qing travel writings on India. We read about Kang Youwei, the Confucian reformist who travelled to India and whose writings capture the tension in the views of many Chinese who saw India as a once glorious civilization with an admirable past (and, of course, the birthplace of Buddhism) but also as a civilization that was in ‘decay’, and for them, held out cautionary tales for China as it was dealing with its own turmoil. In a talk in Calcutta’s Chinatown, Kang would tell his hosts, ‘Indians are surely going to destroy their own country’ while the Chinese, he said, ‘had the aspiration to be independent’.

Further, the reader will also gain familiarity with episodes deeply etched in Chinese consciousness, though relatively unknown in India, which perhaps have contributed to the difficulties in relations between the two new nation-states. Adhira Manglagiri talks of the time when the Sikh policemen of Shanghai (as also  so used in  the concession portions of Tianjin, Wuhan etc.) would become a deep symbol for the Chinese ‘of Indian capitulation to their European masters’ and of India as a weak nation—a perception that often persists amongst some till today, along with, unfortunately, the pejorative of the time, ‘hongtouasan’ or ‘red-headed Asian’, a racial epithet for Indians that remains widely in use so many years later as an insult on Chinese social media. In contrast, Kamal Sheel uses, among other sources, the travelogue cum memoirs of Thakur Gadadhar Singh, Subedar Major of The Bengal Seventh Rajputs, one of the British contributions to the Foreign Joint Expeditionary Force fighting the Boxers to offer a more complex view of the British expansion into India and China.

Yin Cao delves deep into how Hong Kong’s Queen’s Road got its famous Gurudwara in 1901 and the spread of the Singh Sabha Movement across Asia. In contrast, Janice Hyeju Jeong evaluates the Chinese Islamic Goodwill Missions highlighting their transnational and heterogenous connections across the Islamic World, arguing that the Second World War strengthened rather than weakened the cosmopolitan networks of the Chinese Muslims.

Liao Wen-shuo’s essay reveals the desire of the members of the KMT to work with the Indian nationalist movement without disrupting their alliance with Britain. It demonstrates that even while China was struggling to defend itself from the Japanese imperialistic onslaught, the Nationalist Government became adept at balancing its anti-colonial devotions with its inclusion in an international order still dominated by the Imperial Powers. Yet again, the essay by Madhavi Thampi looks at how Hong Kong and other cities of China became unlikely sites of Indian political activism in the first half of the 20th century in Republican China.

The arbitrariness of the national categories—Chinese, Indian and Tibetan—and the continuities which exist between the colonial and postcolonial states is ruminated upon by Tansen Sen through a narrative based on the spy scare in Kalimpong, West Bengal. On the other hand, a different perspective is provided in the essay by Anne Reinhardt discussing shipping nationalism, describing the similarities of challenges faced by nationalist entrepreneurs, Walchand Hirachand (1882-1953) and Lu Zoufu (1893-1952), in seeking to challenge foreign dominance in local waters. And we can go on…

All in all, taken together, the effort can well represent an attempt somewhat akin to creating a kaleidoscope or perhaps a fugue having fourteen cantos distributed across four movements to depict the new forms of contacts, exchanges and mutual learning that these two neighbours went through multiple phases of turmoil, conflict, and anti-colonial resistance in the previous century. Also, just as we need to immerse ourselves, eschewing distractions, while viewing a kaleidoscope or listening to a fugue, so also, this book deserves patient reading and concurrent reflection. These essays may well then help shed more light even on side issues such as the warmth of relationships between the Islamic Republic of Pakistan and its self-declared Communist neighbour or even perhaps the intransigent behaviour witnessed in the Himalayan heights.

The collective effect is to push the reader to get past reductive and easy framings of how two societies interacted.

TCA Ranganathan, former CMD of Export Import Bank, and former Non-Executive Chairman of Indian Overseas Bank, is the co-author of All the Wrong Turns: Perspectives on the Indian Economy (Westland, 2019).