A Dark World of Incest And Cultural Attitudes 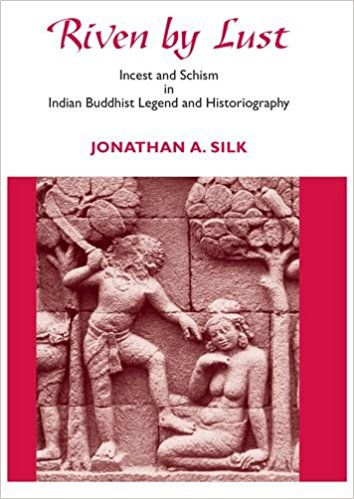 Riven by Lust is a deceptively slim volume: the main text is a little over 200 pages. However, it encapsulates scholarship that is breathtaking in both its depth and range. Silk opens up a fairly well known theme, that of schism within the early Buddhist tradition, but, in the course of investigating the biography of the putative author of the rift, guides us deftly through the dark world of incest and cultural attitudes towards it. The work, Silk informs us, distills insights arrived at through over two decades of scholarship, tracking faint traces of the narrative through Sanskrit, Pali, Tibetan, Chinese and Japanese sources. The author is acutely aware of the need to juxtapose text with context, as he argues persuasively for the existence of more than one version of the Oedipus complex in the Indian context.

In the course of his discussion, he both takes into account and moves beyond the contours of the debate as outlined by A.K. Ramanujan (in for instance, A.K. Ramanujan, 1984, ‘The IndianOedipus’ in Oedipus: A Folklore Casebook, eds Lowell Edmunds and Alan Dundes, pp. 234– 261, New York, Garland Publishing), and Robert P. Goldman (for example, Robert P. Goldman, 1978, ‘Fathers, Sons and Gurus: the Oedipal Conflict in the Sanskrit Epics’, in Journal of Indian Philosophy, Vol. 6, pp. 325– 392), both of whom are cited more than once. These scholars drew on regional (especially Kannada) and Sanskritic traditions respectively. Perhaps the greatest strength of Silk’s argument is his insistence and demonstration of the existence of other possibilities that he opens up through a fascinating exploration of Buddhist sources.

One of the major sects within early Buddhism, that of the Mulasarvastivadins, attributed one of the earliest schisms to a certain Mahadeva. Apart from being assigned responsibility for the schism, he was represented as having an incestuous relationship with his mother, and of committing three murders: that of his father, an arhat (a person who had attained enlightenment) and his mother (who proved to be unfaithful to him), besides misleading innocent initiates. It is this macabre history that Silk unpacks, prising apart its component elements, tracing their lineages through different strands of Buddhist (and other) traditions, through centuries and across several parts of Asia. Silk’s central argument is that matricide, patricide and the murder of arhats were recognized as grievous sins within the Buddhist tradition. For all of these, it was believed, the culprit would be transported to the lowest hell. However, incest, or more specifically, sexual relations with the mother, was not explicitly placed in the same category, perhaps because it was regarded as unspeakable. By suggesting that Mahadeva was guilty of this unmentionable act, Silk holds, the Mulasarvastivadins were adding an irrevocable layer to his already long list of heinous sins. Thereby, they were implicitly dismissing the specific grounds for the schism (which were matters of doctrine and praxis): if the person who advocated these was an irredeemable sinner, then there would have been no need to refute his claims to insight or enlightenment.

This argument is in itself plausible. Even a superficial familiarity with strategies of polemics would suggest how critical the role of slander and vilification of the opponent is in such debates. Silk reinforces this logic through analogies. These range from comparisons with representations of Judas in early medieval European Christian traditions, as part of an anti-Semitic rhetoric, to the ways in which incestuous relationships are represented closer home. The latter includes instances within the Buddhist tradition, where Silk focuses in particular on the histories of a figure known as Dharmaruci, who (and his variants) figures both in Buddhist and other sources such as the Kathasaritsagara. Silk is sensitive to the problems in defining incest and attempts to clear a path through biology and anthropology, bringing his insights to bear on what are literary representations of the relationship. He recognizes the possible pitfalls of the enterprise and comes close to working out a continuum between incest and a range of more or less legitimate sexual unions. However, although he is aware of the significance of contexts, he seems to veer, in the ultimate analysis, towards a somewhat monolithic understanding of incest, with three possibilities— father-daughter, brother-sister, and mother-son. Within these, it is the last that is the focus of his attention.

This poses certain problems. Silk argues, and cogently, for multiple notions of incest in the early Indian context. Yet, his privileging of the mother-son relationship leads to an underplaying of some of the other possibilities. For instance, although he touches on the notion of gurutalpa gamana (literally, approaching the bed of a guru) within the Sanskritic tradition, he does not engage with its implications in ways that could have enriched his complex arguments. We may note here that gurutalpa gamana is described in the Manusmrti (and indeed in the entire shastric tradition) as one of the five mahapatakas (heinous sins). Other violations that figure in the same category include bhrunahatya (a term that could mean either killing a brahmana or an embryo or perhaps both), stealing gold, drinking liquor, and associating socially with anyone guilty of these sins. It is also evident that the Sanskritic/brahmanical, Buddhist and Jaina traditions (as well as others) evolved at least partly through a complex dialogic relationship. As such, the implications of gurutalpa gamana could have been fruitfully explored at length. The fact that the guru could stand for any senior male (and not necessarily or exclusively the preceptor) has, as has been recognized by Goldman, interesting possibilities for an understanding of culture-specific notions of incest. In other words, the ways in which mother-son incest is subsumed within a larger category, rather than isolated, could have been explored more fully. Also, if this is regarded as equivalent to certain other offences, then that in itself is significant in terms of contextualizing our understanding of incest.

At another level, Silk seems uncomfortable with the implications of cross-kin marriage. Once again, and expectedly, given his meticulous scholarship, he touches on it, but shies away from exploring how it might qualify his somewhat primordial understanding of incest. Cross-kin marriage is not only regarded as legitimate in several parts of the subcontinent; it is possible that it may have influenced representations within the Buddhist tradition as part of what has been designated as Ceylonization by T.R. Trautmann (Dravidian Kinship, New Delhi: Vistaar, 1995). These include depictions of marriages between cousins who are mutually attracted towards one another, unions that are nowhere condemned. What is more, Buddhist tradition at least occasionally valorizes brother-sister unions as being symbolic of the purity of certain lineages. Thus, certain kinds of ‘incest’, far from being condemned, were regarded as prestigious ingredients of origin myths. If anything, such examples warn us about the hazards of postulating a definition of incest that holds across time and space.Also somewhat problematic is the way in which Silk isolates incestuous unions from other violations of sexual norms, or even lapses into sexual relations on the part of ascetics. These differences are not as sharply articulated within the textual tradition on which he depends.

The Buddhist textual tradition has a strong misogynist strand, almost inevitable given its compilation and preservation within a monastic order that was, by definition, celibate. In that context, women were regarded as possessing insatiable sexual appetites, and targeting virtually any man who came within their range. Once again, this representation is by no means unique to the Buddhist tradition—strisvabhava, or women’s nature, is represented in virtually identical terms within the brahmanical tradition, as Uma Chakravarti (Everyday Lives, Everyday Histories: Beyond Kings and Brahmanas in ‘Ancient India’, New Delhi: Tulika, 2006) has reminded us. What is condemned, then, is a more generic attribute of women’s nature, rather than a specifically incestuous relationship. Within this framework, incest is viewed as merely one extreme possibility for sexual aberrations amongst many.Silk’s preoccupation with incest occasionally leads to a mistranslation of critical terms. Methunam dhammam, for instance (p.126), which is translated as incestuous intercourse, simply means cross-sex intercourse, which would have been regarded as deeply troubling from the perspective of the Buddhist ascetic. The fact that early Indic languages seem to lack a specific term for incest of the kind that interests Silk is surely significant. Sanskrit, Prakrit and Pali have extremely rich vocabularies, some of which is exclusively and explicitly used to represent specific socio-sexual situations. I was also not quite convinced about the suggested equation between Dharmaruci and Mahadeva. Dharamruci, who figures in the Mahasanghika tradition (and elsewhere), is represented as someone who inadvertently enters into an incestuous relationship with his mother. After committing the whole series of crimes/sins typical of this cycle of stories, he repents, and is ultimately redeemed. Unlike Mahadeva, moreover, it is his mother who initiates the downslide. Whether the opponents of the Mahasanghikas adopted and adapted this story or another, remains, I think, an open question.

In spite of these reservations, Silk’s book is of compelling importance for a variety of reasons. The endnotes are a pleasure to read—detailed, insightful, and painstakingly compiled. In fact, I wish some of them had been inserted in the main body of the text. For instance, the translation of part of Mahadeva’s story, tucked away in a long endnote running into three pages (pp. 233-235) requires the attention of even the casual reader. So also does the summary of the discussion on incest (p.296). In fact, reading all 75 pages of the endnotes is strongly recommended for their richness and range.What is more, Silk’s narrative is carefully and imaginatively crafted. Virtually all of the twenty chapters end, for instance, by luring the reader on with a promise of more excitement. The work has all the qualities of a detective story at its best. We participate in Silk’s search for tenuous links, stumble upon evidence in the most unlikely places, and watch with bated breath as he pieces together the fragile fragments of his elaborate jigsaw puzzle as the contours of his story emerge from the shadowy past. Consider, for instance, the typically tantalizing conclusion of Chapter 3:To understand what the authors of the Vibhasa [a Mulasarvastivadin text] may have been up to, we should begin by familiarizing ourselves with how Indian Buddhists thought about crimes such as incest and murder. It is to this topic that we now turn (p. 20).

How can one not continue reading after such an invitation?

Silk suggests that there is an almost universal fascination with incest because it evokes disgust. To paraphrase this somewhat, the fascination probably lies in its unsettling and disturbing possibilities. The last chapter, Forging Mahadeva, focuses on how and why the narrative of Mahadeva was constructed by the Mulasarvastivadins. Here, as elsewhere, the author opens up the intertwined and complex relationship between early Buddhist history and historiography for scrutiny. In doing so, he plays on the metallurgical significance of forging as well as the quotidian sense of a fraudulent activity. Silk himself forges an understanding of incest that is closer to the former meaning, persuading us to look beyond literal meanings, scrutinize contexts, and grapple with the specificities of the apparently universal. While we may not agree with all his conclusions, the paths he leads us through open up rich possibilities for dialogues between past and present.