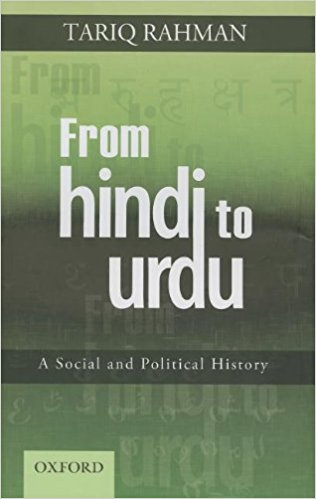 Sample this: A headline in a leading Hindi News channel, ‘Tabaahi ki Taaza Tasveerein’ (Hindi?) Another headline in a leading Urdu daily, ‘Cut-Off Ke Doosre Din Honours Courses Ki Demand’ (Urdu?) And yet the Hindi-Urdu divide has played a crucial role in the history of the subcontinent. Any serious attempt to understand identity formation in India in the wake of the national movement involves the need to grasp the Hindi-Urdu controversy and the role of linguistic conflict in forging communal identity in India, which eventually led to partition. Many studies (A House Divided by Amrit Rai, One Lang-uage Two Scripts by Christopher R. King, The Nationalization of Hindu Traditions by Vasudha Dalmia, to name a few) have approached this issue from different perspectives in their endeavour to untie the knots of this complex linguistic phenomenon. Tariq Rahman’s book under review, however, takes the argument beyond the realm of communal identities that these languages have been associated with. Focusing on the social history of Urdu, he questions the assumptions that associate Urdu with Muslims and explores the situations responsible for the gradual Islamization of the language. In doing so, he relies mainly on thorough linguistic analysis and data.

Foregrounding linguistic history over the political, Rahman convincingly argues that Urdu owes its genesis to Hindvi, Hindi, Gujri, Dakani, and Rekhta and hence has its roots in Hindi, thereby taking a dig at the modern day assumptions, both in Pakistan and India, regarding Urdu being an exclusive Muslim heritage. Rahman uses the authority of Shamsur Rahman Farooqi and linguistic theories and data to establish that the association of the origins of Urdu with military camps and Mughal conquest is inspired by attempts to establish it purely as a Muslim language. This is perhaps the reason most of the scholars involved in this campaign have referred only to works written in Persio-Arabic script in their discussion about the origins of Urdu.