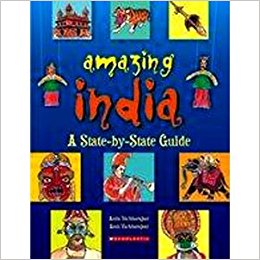 Amazing India: A State-by-State Guide is a treat both in terms of visuals and content in that Anita Vachharajani’s crisp text is amply supported by Amit Vachharajani’s delightful illustrations. The book, aimed at 8-10 year-olds (and perhaps even older!) takes the reader on an informative whirl through India and spotlights the country’s ‘dazzling diversity’. Covering 28 states, 7 union territories, over 400 languages, historic monuments, diverse geography and eco-systems, entrancing music, and dance and craft forms is no mean task! Yet the book, through interesting facts and figures, maps and over 250 illustrations, manages to capture India’s complex nuances with deceptive simplicity. At the outset, a colourful map of India, with its state-wise distribution clearly demarcated, sets the tone. The states are, thereafter, divided into geographical zones for purposes of discussion. The features of each political unit are delineated in terms of the etymology of the name, the history, the main religious aspects, the weather, the flora and fauna, the food and drinks, and the arts and crafts.

There is, in addition, a Fact File box that encapsulates basic details like the date of formation of the unit, the size of the population, the languages spoken, the state animal and so on. Clearly, an effort has been made by the author to recount the most interesting facts pertaining to the various Indian divisions. For example, the binturong of northeast India which isn’t a bear or a cat but is sometimes called a ‘bearcat’ or the hoolock gibbon that scares its enemies with loud hooting noises is among some of the entrancing facts that emerge.

To take one illustrative example of the chapter-wise treatment, the unit on Kashmir discusses, among other things, the derivation of its name, the geographical landmarks, its blend of Buddhist, Hindu and Sufi-Islamic religious aspects, the food, particularly the wazwan of Kashmiri Muslims, the wildlife that inhabits the region, its bitterly cold winters, and the famous embroidery or Kashida of the state that has chinar and grape leaves, cypress cones, flowers and almonds as motifs. Each descriptive paragraph has an accompanying illustration and, at some points, the latter seems to supply more information than the text itself.