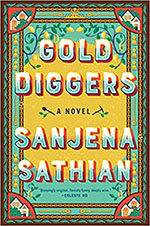 In India everyone buys gold. We are the world’s largest gold consumers. Indian households are the world’s largest holders of gold and household gold is believed to be 40 per cent of the country’s gross domestic product. The country’s obsession with the precious metals has been there since time immemorial.  Gold has always been held as a symbol of success. Considered auspicious, it has helped many people and families sail through in both good times and bad. Gold symbolizes the aspirations, the dreams, the success that everyone seeks.

Sanjena Sathian in her debut novel Gold Digger has beautifully depicted this aspiration albeit through the lives of the Indian Americans living in the US. Many first-generation American Indians crossed the oceans, sacrificed their roots in the pursuit of the great American dream. Now having achieved some part of that dream, they want their sons and daughters to take it one notch higher. Gold Digger is the story of Neil, Anjali, Anita and many other people who live in America and are striving hard to become part of that great American dream.

The story is narrated by Neil Narayan, an endearing, second-generation Indian American living with his parents and older sister in the Atlanta suburb. Neil is the average teenager whose life goals have been set by his parents’ ambition for him.