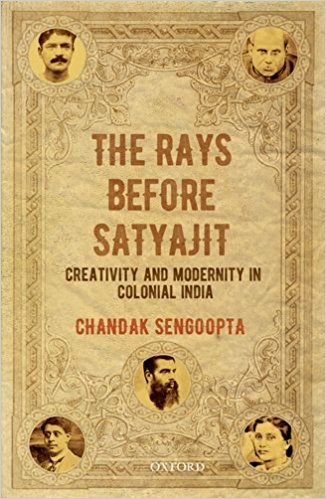 The name of Satyajit Ray, the famous filmmaker is known to film lovers across India. But most Bengalis of my generation would know that Satyajit Ray (1921–1992) was far more than an extraordinary filmmaker. He was an immensely talented music composer, a best-selling writer and one of Bengal’s most gifted illustrators and typeface designers. He revived and edited Sandesh, the highly-respected children’s magazine started by his grandfather in 1913.  Sandesh had to be discontinued in 1935 but was revived in 1961 by Satyajit and the poet Subhash Mukhopadhyay. Ray’s fictional detective Pradosh Mitter alias Pheluda, and Professor Shonku, his sci-fi hero are household names in Bengal. Satyajit Ray’s achievements in a diversity of arts are simply staggering. Equally famous are the names of Satyajit’s father Sukumar and grandfather Upendrakishore. Generations of Bengalis have grown up reading Sukumar Ray’s nonsense verse and Upendrakishore’s stories for children. Chandak Sengoopta’s Rays before Satyajit is a collective biography of an ensemble of characters from the Ray family whose lives play out against the great social and political ferment of the nineteenth and early twentieth century.

The book looks closely at the life stories of certain members of the Ray family in an attempt to understand the nature of colonial modernity. Therefore, the Rays who were involved, individually or collectively, with ‘virtually every reformist project of the nineteenth-century and beyond’ and were driven to invest in a diversity of ‘odd endeavours’, allow us to reflect on the  ‘unruly, ad hoc, and inchoate nature of India’s experiments with the modern’ (p. 2). More specifically, the six chapters (with an introduction and an epilogue) of the book are about the lives and passions of Sukumar Ray (1887–1923), his father, Upendrakishore Ray (1863–1915);  Dwarakanath Ganguli (1844–1898), Upendrakishore’s father-in-law; Kadambini  Basu (1861–1923), Dwarakanath’s wife; Hemendramohan Bose (1864–1916), Upendrakishore’s brother-in-law by marriage to his sister Mrinalini; Sukhalata Rao (1886–1969), Sukumar’s elder sister and Suprabha (1892–1960) his wife, Apart from the principal protagonists there is also a fairly large supporting cast of  interesting characters.