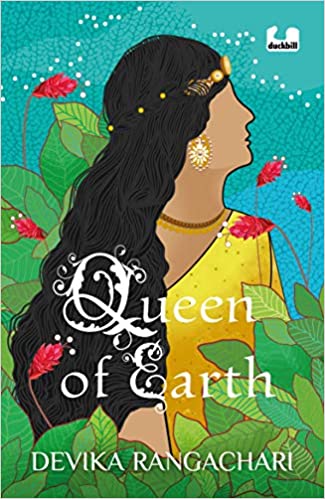 ‘History tells us what people do. Historical fiction helps us imagine how they felt.’ Jean M Auel

Queen of Earth is a gender bending narrative of a spunky queen, appropriate to our times.

Kalinga of the seventh century is a vast land ruled by two adversaries, the Somavamsha and the Bhaumakaras.

The fate of a young princess caught in their crossfire is expertly depicted by Devika Rangachari in Queen of Earth.

Power struggles, rivalry, bloodshed are common among royalty, but the compelling question is, does it play out differently when the aspirant to the throne is a woman?

Prthivimahadevi, a seventeen-year old princess who is also an intelligent, ambitious woman, is forced to bury her aspirations to the throne. Her role is to be subservient to the powerful men in her life. Assuredly, she has an important role to play, but only as a pawn when mighty dynasties clash.

Fate however, is a tricky thing.  Just like in real life, there is not much room for plans here. Events happen just as she had wanted them to and then again so differently that she is forced to calibrate her desires anew. She neither leads the life she was groomed to, nor the one she was forced into. It is a brave, new land that she must carve out for herself. Her spirited, gritty bearing marks her out for the queen she is.