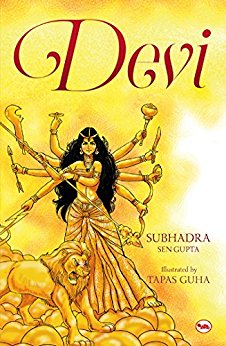 Three major deities of Puranic Hinduism, three tales about each of them. Well, not exactly. Three tales each about Vishnu and Shiva, but the collection titled Devi has a story each on Parvati, Durga, and Saraswati. These are tales that have been told and retold over countless generations, and Subhadra Sen Gupta, skilled storyteller that she is, recreates the old magic in language that the internet generation can quickly relate to. So one finds the devas hailing one another with a ‘Hey!’ and hears Indra exulting that Vishnu is a ‘champion swimmer’. The lingo is ‘with it’ all right. Most of the mythological tales familiar to us today have multiple versions in the various Puranas and in one or both of the epics. Their variations are reflected in turn in other storytellers’ narratives which add further nuances. Every telling, every recitation is, in any case, also a recreation. These three books, with their nine condensed tales, are also retold with their own excisions and embellishments.