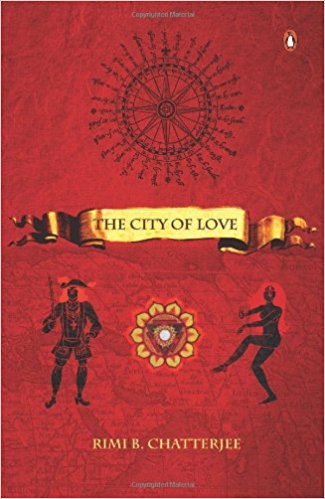 The City of Love is a fascinating novel ranged around the central metaphor of multiple journeys that traverse the globe and the inner reaches of the mind and also recreates in fine ethnographic detail the era of colonial expansion of the early years of the sixteenth century that brought East and West face to face with each other. The resultant clashes engage the reader in the binary of the ‘self’ and the ‘other’ and demonstrate how each human being searches for meaning in his/her own way, and however disparate paths and origins, the final destination is the same—an insight into the self. Mankind’s eternal quest for fulfillment in the form of the quartet of Dharma, Artha, Kama and Moksha is the context in which Rimi Chatterjee locates her novel The City of Love. Taking the reader on a voyage of discovery, she traverses space and time in the early years of the western quest for the Shangri-La of the East and shows how this vision is one in which every dream of mankind has its basis.

Since this journey began over the oceans, the novel contextualizes the multifaceted nature of the quest by describing a majestic phantom city shimmering upside down in the clouds. Rooted in heaven, it would seem to stretch its rainbow-textured spires and minarets to him, but even as he would have laid his hand on a rope to climb to it, it would be gone. And for a moment his rubies would dim, and his camphor smell stale, and even the sea would turn leaden and lusterless, if that city were forbidden to him. (The Beginning)

The novel traces the destinies of four major characters all of whom are in search of this elusive ‘city of love’. We meet the major players whose destinies are linked by chance encounters and a common desire for fulfillment. We meet Fernando Almenara, a ‘Castilian by birth and a Florentine by adoption’ who lands up, when the novel opens, in the dungeon of Sultan Mohammad Shah of Malaka. Fleeing religious persecution he sets out on a voyage to escape ‘the poison of church and state’ for the ‘balm of nutmeg, ginger, pepper, clove, balsam and mace’ and search for ‘the true illumination of the ancient world and wise ones who would give it to him’. Like Fernando all the characters in the novel are on the run from one form of control or the other, but ultimately realize that there is no escape from oneself and all boundaries and limitations are actually self-imposed and so the freedom from them can also only come from within.

Chance, the force that has all the cards in its hand and deals them out at random, takes Fernando to Calicut instead of Cochin and links his destiny with Daud, who rescues him and takes him aboard the Shaan-e-Dariya manned by a motley group joined by a common desire for pelf. The story now moves to Chittagong where ‘piracy and trade lived in a happy if not quite holy state of matrimony’ and we encounter the other players in this drama. Among these are Bhairavdas, the Shaiva-tantric and his son Chandu, and also Bajja, the jungli, who plays midwife at Chandu’s birth and will be the one to play a similar role all through his life. She is on the margins of society as she is of a caste and gender that is forbidden access to conventional wisdom, but the novel is ultimately a defiant opposition to this limited and scriptural knowledge.

Each of the characters occupies in her/his way a space of liminality that gives them the impetus to discover the true meaning of happiness by reconciling divisive binaries into a synergy of completion. The prominent binaries that the characters negotiate are masculine/feminine, high/low, civilized/jungli, canonical/folk, etc. While Bhairavdas engages in arcane rituals to propitiate the godhead he worships, and the crew of the Shaan-e-Dariya fight for their share of the riches of the East, Chandu is growing up under the maternal protection of Indrani and his sister Parvati and often flees the stifling environment of home and the harshness of his father’s control to share moments of freedom with Bajja in the untrammeled spaces of the jungle that is her home, and is on the margins of civilization. It is Pir Baba, who is a Sufi unencumbered by the boundaries of conventional religion, who shows Bajja her first vision of the ‘city of love’ that is the ultimate destination of all seekers.

When you have joined with another, then sundered, then only do you feel the shape of your soul in the lines of your grief. Until then, you are still a child, you have not seen your own face, nor entered the gates of the city of love. (p. 99)

As the threads of the different empires struggling for supremacy over the spice trade get entangled in bloodshed and political manoeuvring, Chandu is confronted with the binary of his father’s dictates regarding his future and his education in Sanskrit, ‘the language of the gods’ forbidden to Bajja who is low-born and a woman; and the pull of the native and folk wisdom that Bajja’s and Dhumvati’s stories give him. Bajja, like Fernando, Dhumvati, Pir Baba and Duad, occupies a marginal space in the socio-cultural environment of this site in the subcontinent and it is only in these margins that the search for truth can begin.

This is a bad time for the old ways: too many new things have come to challenge the shadows where the truth moves. We live on the edges … It’s only on the edges that you can see the whole truth. (p. 139)

As Chatterjee moves into the heart of the forest, it is Dhumvati and Pir Baba who replace Bhariavdas’s Shiva-Shakti dyad and with the lesson that gives Chandu the direction to follow as he embarks on the quest for self-knowledge.

not faith, nor rituals, nor worship, nor purity, nor meditation, nor austerity, nor penance, nor good work, nothing can give you enlightenment but the knowledge and the querying of your own body and mind. (p. 140)

The City of Love is a well-researched and fascinating story that challenges the boundaries of the conventional novel of adventure emblematic of the Victorian era to encompass a journey that collapses the hierarchy between the body and the soul, as each seeker strives for completion. All the multiple stories have been woven together skillfully to create a rich and exotic tapestry in a language that owes its luminescence to the author’s complete control over all the narrative elements at her command. While her style is eminently readable and abundantly decorated with metaphors and evocative symbolism, the reader has to work hard to keep pace with the myriad characters and their individual stories. The complex philosophical details add interesting nuances to the story but also occasionally detract from the pace of the narrative as the reader has to struggle to contextualize the outer drama with the inner conflict being played out in the minds and hearts of the characters. In her attempt to recreate the era Chatterjee does remain faithful to historical details, but these do sometimes overwhelm the reader with their unfamiliar names and the narration of events that are not always linked to the thematic focus of the novel.

The ending of the novel left me a little dissatisfied as it demanded too much suspension of disbelief. After such a long journey over land and sea, I was still not convinced that Chandu had ‘realised’ himself and the place where he does arrive did not have any of the magic and the mystery that Chatterjee promised. However, I wonder if that is the whole point—it is the journey rather than the destination which is ultimately of significance in our search for self-knowledge and love.

On the whole, The City of Love is a book I would recommend to anyone who is interested in an era that has received little attention in the Indian English novel that has primarily concerned itself with complexities of postcolonialism or the expression of an urban sensibility struggling for meaning and identity in the modern world. As you read Chatterjee’s novel you will be struck by its skillful bringing together of the magnitude of the oceans and the small private spaces of the inner self and will celebrate the journey undertaken by the fortunate denizens of the city of love who sing to themselves in their joy, recognizable only to each other. They are neither magicians nor sages, nor adepts nor kings, but the rarest of creatures, happy people. They need no lovers, for the world loves them and they love the world. (p. 264)

Anjana Neira Dev is a Reader in the Department of English at Gargi College, University of Delhi. Her areas of interest include Indian English Writing, the Post Colonial Novel, Poetry, Creative Writing and the teaching of English for Special Purposes.