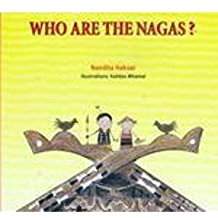 Books about the history of the various ethnic groups of North East India may be found abundantly in libraries but those catering to the minds of young children are few and far between. That is why Who are the Nagas? in its attempt to reach out to children is a commendable effort. Haksar, a human rights lawyer and author, makes an ethnographic study of the Naga tribes in this book. Apart from Illustrations, puzzles and crosswords the book paints a very vivid picture of the region and its people—about whom not much is known, outside of their land. Originally intended for Naga children, the book can be a treasure-trove for anyone who wants to know about the history and culture of the Nagas. From the etymology of the word ‘Naga’ to their intricate ornamentation, Who are the Nagas? very lucidly, presents the way of life of the Naga people.

The book leads the reader via a series of activities through the history of the Naga tribes as they traverse from Yunan Province of China (as experts believe) and come to settle in what is now known as Nagaland, and thereon goes on to describe their different cultures and dwellings. It delves into interesting tidbits of information—such as that the international boundary between India and Myanmar passes through the house of the chief of the Konyak tribe—which are bound to keep the reader engrossed.